At least 55 suspected Taliban fighters have been killed in the last 24 hours by Pakistani government forces in the NWFP, a military statement released on Friday said.

Three soldiers were killed in Taliban counter-attacks over the same period, the statement said.

At least 834,000 civilians from the Swat and Buner districts are registered as displaced persons with the United Nations after leaving their homes to escape the fighting.

Antonio Guterres, the UN High Commissioner for Refugees, told Al Jazeera on Thursday that the scale of the refugee crisis is overwhelming.

“Pakistan has no capacity to deal with these people and to provide them with the basic needs they require. The Pakistani people are in need of massive humanitarian support from the international community,” he said from the Swabi refugee camp on Thursday.

“If you look at the movement [of people from the war zone], it is indeed the biggest movement in present times. Massive humanitarian support is required or else there will be a humanitarian disaster.”

The Pakistani military has up to 15,000 troops in place against about 4,000 Taliban fighters in the northwest of the country.

At least 750 suspected Taliban fighters and 33 troops have died in military operations in Lower Dir, Buner and Swat since April 26th, the military says.

The military onslaught comes after increasing pressure by the US government to take a stronger line against the Taliban.

The US military on Thursday confirmed newspaper reports that it had shared with Islamabad surveillance data from drones flying over Pakistani territory.

Admiral Mike Mullen, chairman of the Joint Chiefs of Staff, said at a US senate hearing that Pakistan had requested surveillance support missions up until April.

“Those requests have ceased over the period of about the last month.”

The New York Times had earlier reported that the US military had shared intelligence data from drones with the Pakistani military.

Mullen said the newspaper report was an “accurate portrayal” of co-operation between Washington and Islamabad.

But the Pakistani military has strongly denied that it is co-operating with US forces in the deployment of the drones.

“In terms of Pakistani control of or liaison with those drones, the Pakistani military is absolutely adamant – they are operating completely by themselves in this campaign [against the Taliban] and are receiving no help from any outside force,” Mike Hanna, Al Jazeera’s correspondent in Islamabad, said.

“There appears to be a very keen realisation, by the military in particular, that this [current] campaign is dependent on public support, and of ongoing political support within this [country’s] divided political nexus.”

Pakistan has in recent months stated its opposition to US drone flights over its territory.

Bombs launched from drones have been responsible for the deaths of at least 390 people in Pakistan, many of them civilians, since August 2008.

Islamabad has called the drone flights and bombing runs a violation of its territorial sovereignty. 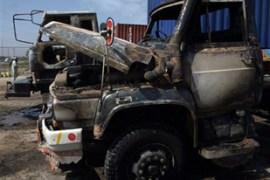 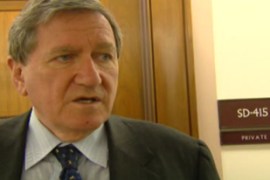 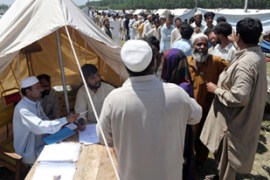 Military says it has taken Swat leader’s stronghold as hundreds of thousands flee.

Pakistan: Taliban ‘on the run’