International relief efforts are gaining momentum in Haiti, a week after an earthquake killed tens of thousands of people and left three million in need of help, but relief workers are facing fresh problems from severe shortages of fuel.

After criticism that military and rescue flights had been given priority over humanitarian aid at the tiny Port-au-Prince airport, the US and UN have now agreed to prioritise aid, paving the way for critical supplies to get out to survivors.

But fuel shortages, as well as security concerns, bureaucratic confusion and the sheer scale of the need, continue to pose severe challenges to the distribution of aid.

The UN food agency said it was planning to move close to 38,000 litres of diesel fuel a day from the neighbouring Dominican Republic.

“The danger here is that those fuel supplies that the UN says it is simply running out of are also fuel supplies for all of the UN agencies who are meant to be spearheading this relief effort,” he said.

“The problem is distribution – it’s getting the aid that is already at the airport out to the places that need it most, and if the fuel is running dry that means that won’t be able to happen.”

The UN said more than 73,000 people had received a week’s rations, but relief groups estimate that as many as one third of the nine million population is in need of assistance, and some 300,000 survivors in the capital alone are still living in sprawling tent cities.

Al Jazeera’s Tony Birtley, reporting from the capital, said people were scavenging, going through buildings and taking whatever they could find to either eat or barter for food.

But while there were reports of isolated incidents of violence, for the most part, there was an “organised calm” in the capital, Birtley said.

Frustrations were continuing to mount, however, at the pace of aid distribution – still too slow for many living on the streets with little food, water and shelter – and there were fears that security would deteriorate in the coming days if the situation did not improve, he added.

Still, the US military’s commander on the ground said the city was actually seeing less violence than before the earthquake.

“The level of violence that we see now is below the pre-earthquake levels,” Lieutenant-General Ken Keen said.

“Nevertheless, any incidents of violence will impede our ability to deliver humanitarian assistance.”

US officials said some 2,200 marines were arriving to join 1,700 US troops already on the ground and Ban Ki-moon, the UN secretary general, announced on Monday that he would seek 3,500 more UN police and peacekeeping troops join the existing 9,000 stationed in Haiti.

Meanwhile, the US has responded to criticism that medical equipment, nurses and doctors should be given priority access to the country over security if aid efforts for those most in need are to succeed.

Al Jazeera’s Zeina Khodr, reporting from the Port-au-Prince, said: “[The US military says it] needs to create a secure environment to distribute aid to the people, because they are worried that there could be riots.

“They have to secure distribution centres. They make it clear that they will be helping out in humanitarian assistance, but the UN will be providing that security.”

However, Khodr said she had seen few UN peacekeepers on the streets and that the Haitian police were already overstretched.

“There are incidents of violence, [there are] desperate people trying to find food and water, but there are also criminals out there,” she said.

Birtley said many Haitians appeared to be giving up hope of finding survivors after so many days.

While aid workers continued efforts to make their way into the country, many people were trying to get out.

Hundreds of US citizens, or those claiming to be, could be seen in a long line outside the US embassy in Port-au-Prince in the hopes of arranging a flight out of the country.

The US said on Monday that it would temporarily allow entry to orphaned children to receive needed care.

“Authorising the use of humanitarian parole for orphans who are eligible for adoption in the United States will allow them to receive the care they need here,” Janet Napolitano, the homeland security secretary, said.

The policy will be applied on a case-by-case basis to children legally confirmed as orphans eligible for adoption in another country by the Haitian government and who are being adopted by US citizens.

European nations pledged more than $500m in emergency and long-term aid on Monday, on top of the $100m promised earlier by the US.

But Leonel Fernandez, the president of neighbouring Dominican Republic, said on Monday that it would cost $10bn over five years to rebuild the country. 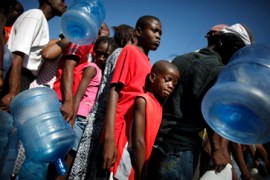 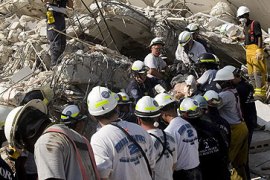 US officials say massive military deployment for “humanitarian mission only”. 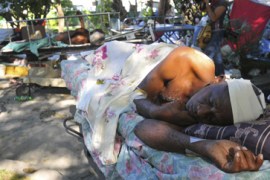 Relief workers battle to get supplies from airport to people affected by earthquake. 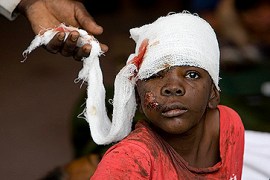 Thousands of Hatians remain without water, sanitation or electricity.