The Pacific island nation of Samoa has become the first country in decades to change driving sides.

Not since Ghana, Nigeria and Sierra Leone changed sides in the 1970s have any country made the switch.

And it is likely the first time any country is switching from the right to the left – every other change has been the other way around.

Apart from electrical sockets and voltages, the side on which people drive is one of the basic things the world is divided over.

And because these systems are well entrenched, they are very difficult to change in the interest of single global standards.

About 70 per cent of the world population drives on the right-hand side of the road – just like drivers in Pompeii and other ancient cities did.

This is partly due to a larger cultural preference for right-handed activities.

The countries committed to the left are mainly Britain and its various former colonies and Japan.

While technology has helped overcome the electrical socket and voltage conundrum by way of adapters, there is no such help when it comes to the road.

Unless that is you drive a bicycle, motorcycle, a quad bike, a cart or anything on three wheels.

The laws that say that one must drive on the left side or the right side are not based on any detailed scientific study or protracted debate.

They just emerged from cultural norms that existed long before the car.

As Peter Kincaid, the author of The Rule of the Road, says, the reason why you drive on the right or the left today has to do with two things.

The first is that most people are right-handed.

The second is that different countries were using different forms of transportation at the time formalised rules of the road began to emerge.

The way in which the first consideration interacted with the second, explains how we drive today.

In Japan, a Samurai who kept his scabbard on his left side and would draw with his right arm, wanted to be on the left as he passed potential enemies on the road.

So the Japanese today drive on the left.

The mostly right-handed drivers would naturally sit to the right, holding the reins in the left hand and the whip in the right.

They could better judge oncoming traffic by travelling on the left. So Britain drives on the left.

But in many other countries, a driver often walked along the left side of his horse team or rode the left horse in a team, so that he could use his right arm for better control.

This meant it was better to stay to the right, so he could judge oncoming traffic and talk to other drivers. The result is that many countries today drive on the right.

But despite the enormous hurdles – physical, economic and political – that any move to change the driving side has to face, many countries have made the switch to match up with neighbours. Like Canada did in the 1920s and Sweden did as late as 1967.

The current change in Samoa is ostensibly to help people get the benefit of cheap, used vehicles from richer neighbours Australia and New Zealand that drive on the left.

Its opponents talk about the danger involved in making the change.

But four decades ago, the Swedish switch was over safety.

With the rest of continental Europe and its Scandinavian neighbours driving on the right, proponents for the change said it would lower the increasing number of accidents involving foreigners driving on Swedish roads.

However, the majority of Swedes opposed the huge costs of the changeover, and, like in Samoa today, said that accident rates are bound to rise.

Motions to switch from left-side driving were raised in the Swedish parliament several times in previous decades, only to be shot down.

The issue was put before the Swedes in a 1955 referendum, but the measure was overwhelmingly defeated.

Undeterred, backers of right-side driving finally got a measure approved by the government in 1963.

So, another September day, the third day of the month in 1967 was set as the “H-Day” (after hoger, the Swedish word for right).

Unlike in present day Samoa, where tensions between the pro- and anti-change groups are running high, there was an unusually festive air in the streets of Stockholm that Sunday morning.

The streets were clogged with cars and bicycles as many were keen to be part of a historic traffic jam. And the moment the church bells chimed at six, Swedes began driving on the right.

In the build-up to the day, the predictions of ensuing chaos and destruction grew dire.

“What is going to happen here in September has cast many grotesque shadows all over Sweden,” The New York Times observed darkly.

Just like what the Samoan lawyer hired by those opposed to the switch had to say: “Cars are going to crash, people are going to die – not to mention the huge expense to our country.”

While it is still early days to predict what will happen in the Pacific island, we do know what happened in Sweden that September.

The roads got safer. A below-average number of accidents were reported a day after the change.

For one, many Swedes, scared by the dire predictions, either did not drive or drove less.

Second, a special speed limit, in place much before the changeover, was enforced.

And most importantly, the whole operation was run with Scandinavian efficiency, respect for the law and penchant for safety. After all, this was Volvo country.

And it was not just for a few days, or even weeks, after the changeover that Swedish roads became safer.

It took a year for the accident rate to return to what it had been the year before the switch.

The Samoans can take heart from the Swedish experience and hope their prayers on Sunday for a changeover “free of injury and, heaven forbid, death” are answered. 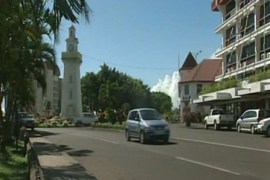 No glitch in Samoa driving switch

Pacific nation reports smooth change to driving on left side of road. 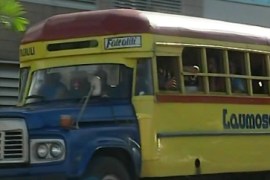 Critics warn of traffic chaos as residents ready to drive on left-hand side.