“We were demanding from [al-Hariri] to present a draft that is acceptable to our demands in order to negotiate over it.”

The Reuters news agency reported political sources as saying al-Hariri might react to the opposition rejection by stepping down.

Should he do so, Suleiman is expected to hold consultations with parliamentarians this week to designate a new prime minister, but with al-Hariri holding the majority in parliament he would likely be reappointed.

Hezbollah had already criticised the proposed cabinet line up, with Hassan Nasrallah, the group’s leader, saying it would divide the country.

“I do not believe this way of doing things will lift Lebanon from the crisis over the formation of the new government,” Nasrallah said in a televised speech.

“It will make the problem more complicated.”

Nasrallah said that the minority opposition would “stand up to this inadequate measure and in complete solidarity”, but did not elaborate.

The rival factions have agreed on the division of seats in the new cabinet in which al-Hariri’s “March 14” coalition gets 15 seats and the “March 8” alliance getting 10 seats.

While the details of al-Hariri’s proposed cabinet have not been made public, it was said to have failed to meet the demands of Michel Aoun, a Hezbollah ally and leader of the Christian opposition.

Aoun called on his party members to “resign immediately from any cabinet that includes their names”.

Al-Hariri has been unable to reach a deal with the opposition on the government since he was appointed prime minister after winning Lebanon’s June 7 polls.

The prolonged impasse over the government has held up key decisions on economic and financial reform.

Beirut newspapers on Tuesday were unanimous in predicting that no government would emerge in the coming days, but differed on whether Lebanon would face another political crisis. 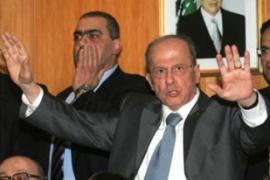