Washington had demanded ahead of the talks that Iran come clean about its nuclear ambitions, which several Western countries have suggested include a drive towards nuclear weapons.

Tehran, however, has repeatedly dismissed these accusations saying that the atomic programme is to meet civilian energy needs.

Javier Solana, the European Union policy chief, said that he would be seeking iron-clad guarantees that Iran’s nuclear programme was peaceful.

“I don’t think that will be an easy task. But we are going to continue with our efforts,” he said.

But tensions between the Islamic Republic and the so-called P5+1 – the US, Russia, China, France, Britain and Germany – have been raised by a series of missile tests and the disclosure or the second uranium enrichment plant.

Salehi said that it would soon offer the International Atomic Energy Agency (IAEA), which polices the use of nuclear technology around the world, a timetable for inspection of the new facility near the city of Qom.

“We are discussing by phone and letters with the IAEA to reach an agreement for the date and way of inspection,” he said.

Salehi also insisted that concerns about the uranium enrichment plant, which some analysts have suggested could be used to process weapons-grade material, are “baseless”.

The White House has called on Tehran to give IAEA inspectors “immediate, unfettered access” to the site, which brought widespread condemnation from the permanent members of the Security Council.

Israel’s defence minister, Ehud Barak, said on Tuesday that severe sanctions must be imposed on Iran following the uncovering of the uranium enrichment plant and added that Israel was keeping all of its options on the table.

Salehi defended Iran’s decision to build the second enrichment plant as a measure to mitigate the damage to its nuclear programme in the event of an attack by Israel or the US.

“The site has been selected on purpose at a place that will be protected against an aerial attack,” he said.

“The site was chosen adjacent to a military base. The military has already installed active defence systems.”

Meanwhile, an Iranian MP warned that parliament may vote to pull the country out of the global nuclear Non-Proliferation Treaty (NPT) if the powers continue to threaten sanctions.

“If the Zionists and America continue their pressure on Iran and if the talks with [the six powers] do not reach a conclusion, then parliament will take a clear and transparent position, such as Iran’s withdrawal from the NPT,” the IRNA news agency quoted Mohammad Karamirad as saying.

Iran, which has been hit by three previous rounds of sanctions, has repeatedly said that it has no intention of quitting the NPT, under which nuclear facilities are subject to IAEA inspection. 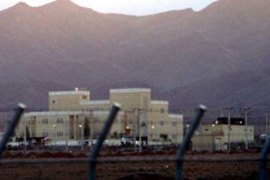