“The only group that has the resources is the government – it can of course work through others, but it has to get involved.”

On Wednesday the US ambassador to the UN added Washington’s concerns over the video.

“These reports are very disturbing, they are of grave concern,” Susan Rice told reporters.

“We’d like more information as we formulate our own national response.”

The Sri Lankan government has dismissed the video as fake and denied its forces carried out abuses.

Previous attempts at the UN to formally raise the issue of Sri Lanka’s conduct during its final offensive against the Tamil Tiger rebels met resistance from Russia and China.

Both countries rejected calls for official Security Council discussions, saying the was an internal matter for the Sri Lankan government.

The video originated from a group calling itself Journalists for Democracy in Sri Lanka.

Ban Ki-moon, the UN secretary-general, has not called for an investigation, although a spokeswoman indicated on Monday that he was taking the issue seriously.

“We have always viewed with utmost concern the reports and information received from various sources of serious human rights violations, including those related to war crimes,” Marie Okabe told reporters.

James Ross, legal and policy director for Human Rights Watch told Al Jazeera that more must be done to find the truth behind the video and the extent of alleged abuses.

“The video is disturbing and makes clear we need an independent international inquiry into not only this incident, but also into the violation of human rights in the final months of the fighting that took place on both sides,” he said. 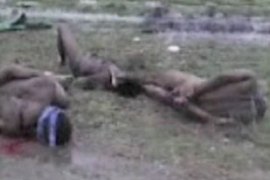