“The engine of a second vehicle is heard departing towards the north. We are still co-ordinating teams to talk to people in the area.”

Mauricio Funes, El Salvador’s president, said he “strongly condemned” the killing of the journalist, and urged authorities to “conduct all necessary investigations so that those responsible are brought to justice”.

Poveda was attacked while he was returning from a film shoot in La Campanera, a suburb controlled by gangs which lies north of the capital.

He first visited El Salvador in the early 1980s to cover the country’s 12-year civil war and returned afterwards to work on documentaries examining street gangs.

His work has been published in newspapers such as The New York Times, Le Monde and El Pais.

“I think he has done a great public service by making his film and by educating people about the root causes of this issue, which I think are largely absent from public discourse,” she told Al Jazeera.

“We have seen for a number of years the governments of Central America respond to this issue largely with iron-fist policies, which focus exclusively on law enforcement.

“We have seen in a recent study that the most effective responses to youth gang violence are comprehensive – they use not only law enforcement but also prevention, intervention and rehabilitation services which focus on providing youth with social support services, at the community level.”

“La Vida Loca”, one of his most recent documentaries, focused on the Mara 18 gang, a group of Salvadorans involved in drug trafficking and extortion.

The Mara 18 and rival Mara Salvatrucha gangs form a vast criminal network stretching from Los Angeles in the United States to areas of Central America.

There could be as many as 30,000 so-called mareros, who sell drugs, rob illegal migrants or extort businesses in El Salvador, according to estimates by authorities. 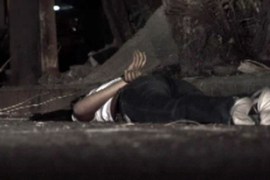