Prosecutors say that Zazi was trained by al-Qaeda members in Pakistan on how to make explosives and that he may have plotted to target New York’s transport network.

Investigators have identified three people suspected of involvement in the plot, a law enforcement official said on Monday, on condition of anonymity.

Zazi and his accomplices are said to have used stolen credit cards to buy bomb-making ingredients in Denver, the authorities say.

But Dowling said on Tuesday: “I don’t know the names of anybody else that allegedly conspired with Mr Zazi… Those names have not been produced.”

It is unclear whether the authorities have actually recovered any bomb-making materials.

Prosecutors allege that Zazi moved to Denver after returning from Pakistan and bought beauty products containing bomb-making chemicals over the course of a few weeks, court papers show.

Zazi took some of his products to a hotel room in Colorado and attempted to cook up a bomb, while seeking another person’s help, the authorities have said.

The cooking hob on which he allegedly tried to make the bomb was found to have acetone residue on it, authorities said.

The US Federal Bureau of Investigation had been monitoring Zazi and tracked him on September 9 when he rented a car and drove to New York – two days before the anniversary of the September 11, 2001, attacks.

Zazi told an imam in the Queens suburb of New York on September 10 that he was worried that he was being watched, court papers said.

The imam later told Zazi that police had come around and asked questions, the papers said. Zazi left New York but was arrested in Denver, along with his father, on September 19.

Prosecutors last week called for Zazi to be jailed indefinitely, saying that he posed “a significant danger”. 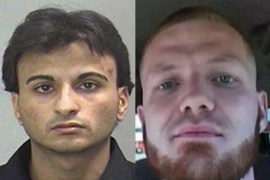 Two detained in US over bomb plots

FBI undercover operations lead to arrests in alleged attempts to blow up buildings.