Lawyers for Polanski, who was arrested on Saturday at the Zurich film festival, have said the director will fight a request for his extradition.

Herve Temime, his French lawyer, said the 76-year-old “refused the extradition request” and that a motion for his release from Swiss custody will be filed.

Polanski was arrested in the US in 1977 and charged with giving drugs and alcohol to a 13-year-old girl and having unlawful sex with her at a photographic shoot at the Hollywood home of Jack Nicholson, the American actor.

He admitted unlawful sexual intercourse as part of a plea bargain with prosecutors but fled to France after it emerged that the judge was likely to jail him beyond the 42 days set out for his evaluation.

Samantha Geimer, the victim, who long ago identified herself publicly, sued Polanski and reached an undisclosed settlement, and has since joined his bid for the case to be dismissed.

A group of prominent Polish film-makers, including Andrez Wajda, an Oscar-winning director, have also appealed to to US, Swiss and Polish authorities to free Polanski.

In a letter posted on the Polish Filmmakers Association website on Monday, the group called on Switzerland to immediately release the director.

“We demand that US authorities conduct an honest revision of the abuses in the investigation and prosecutors’ proceedings in the case of Roman Polanski, to whom clearly different standards were applied than to US citizens.”

But Polanski is considered by the US authorities as a fugitive from justice and since fleeing America, he has lived in France avoiding countries that have extradition treaties with the US.

Polanski’s life has often featured in the media, first after the murder of Sharon Tate, his pregnant wife, by the Charles Manson cult in 1969.

A native of France who was taken to Poland by his parents, Polanski escaped Krakow’s Jewish ghetto as a child and lived off the charity of strangers. His mother died at the Auschwitz Nazi death camp in the 1940s.

He worked his way into film-making in Poland, gaining an Oscar nomination for best foreign-language film in 1964 for Knife in the Water.

Offered entry to Hollywood, he directed Rosemary’s Baby in 1968 and went on to make another American classic, Chinatown released in 1974.

In 2003, he won the Best Director Oscar for The Pianist. 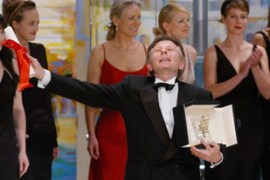 Celebrated film-maker Roman Polanski has won his libel case against Vanity Fair, ending a week-long trial in which he gave video evidence from Paris to avoid extradition to America where he is wanted for having sex with a girl aged 13.