“They have called for private individuals to help as much as they can. They called for the media to also play an active role … what we’re seeing here is the local government pulling together with the residents trying to help each other out.”

Anthony Golez, the officer in charge at the Office of Civil Defence in Manila, told Al Jazeera: “All the contingents of the armed forces of the Philippines … were dispatched as soon as they heard flood waters were rising in many areas in the national capital region.

“On the first day, we were able to rescue thousands of people. Unfortunately, in those areas where flood waters were really high … the assets of the armed forces, like the trucks and rubber boats, were not able to get through.

“That hampered the rescue effort [and] some people are still stuck in flood waters.”

Richard Gordon, the chairman of the Philippines National Red Cross, said: “The challenge is to find out how many people have died and how many people we have to take care of in terms of people who’ve been displaced.

“We’re really talking about maybe hundreds of thousands of people,” with about 280,000 to 300,000 displaced in the main island of Luzon alone, he said.

The death toll is expected to rise further.

The government has declared a “state of calamity” in Manila and 25 storm-hit provinces, allowing officials to use emergency funds for relief and rescue, Gilbert Teodoro, the defence secretary, has said.

Ketsana roared across the northern Philippines near Manila on Saturday, unleashing more than a month’s worth of rain in just 12 hours.

The storm swamped entire towns, set off landslides and shut down Manila’s airport for several hours.

Aerial photographs showed the severity of the flooding with buses nearly completely submerged and people climbing on top of their vehicles to escape the danger.

Emergency workers could be seen carrying bodies, including those of children, on makeshift stretchers in Marikina in eastern Manila.

Distress calls and emails from thousands of residents in metropolitan Manila and their worried relatives flooded TV and radio stations overnight.

The sun shone briefly in Manila on Sunday and showed the extent of devastation in many neighbourhoods – destroyed houses, overturned vans and cars, and streets and highways covered in debris and mud.

One resident, Ronald Manlangit, said: “The water was rolling and everything happened in a flash; every minute it was rising. So I said to myself “if this reaches the second floor of our house, then a lot of people here would die”.”

The 42.4cm of rain that swamped Manila on Saturday exceeded the 39.2cm average for September, weather bureau director Nathaniel Cruz said, adding that the rainfall broke the previous record of 33.4cm in a 24-hour period in June 1967.

Rubbish-choked drains and waterways, along with a high tide, compounded the problem, officials said.

Gloria Arroyo, the Philippines president, travelled on an elevated commuter train to the disaster council office to preside over a meeting on Saturday because roads were clogged by vehicles stuck in the floodwaters.

Ketsana, which packed winds of 85 kilometres per hour (kph) with gusts of up to 100kph, hit land early on Saturday. It then roared across the main northern Luzon island towards the South China Sea.

Golez said: “This kind of rain, which struck one area of the country, would overwhelm any country, any system of government. The last time this kind of rain was experienced was 100 years ago.

“Prior to this typhoon, the same locality was also hit by three typhoons consecutively, which means the soil became super-saturated, and therefore flooding was inevitable, especially in the urban, low-lying areas.

“We have a very good weather warning forecast centre, but the entire national capital region and the nearby provinces were hit all at the same time.” 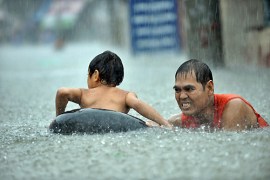 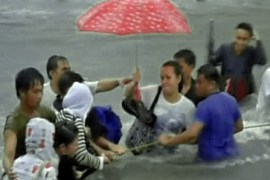