Smadi, who had been under intense surveillance by the FBI, was arrested the previous day after he placed an inactive car bomb at a 60-storey glass office tower in the business district of Dallas, according to the US justice department.

FBI agents posing as al-Qaeda members had provided him with what he thought were explosives.

“Unbeknownst to Smadi, the FBI ensured the [bomb] contained only an inert/inactive explosive device which contained no explosive materials,” the department said.

The FBI said Smadi, 19, had repeatedly said he had come to the US with the purpose of committing “jihad for the sake of God”.

In the second case, an Illinois man was ordered detained on Thursday on the charge that he tried to blow up a federal building in the state capital, Springfield.

Michael Finton, also known as Talib Islam, was arrested in an undercover operation as he used a cell phone to try to detonate a bomb he believed was inside a van he had just parked outside the building.

The criminal complaint said Finton idolised John Walker Lindh, an American who allied with the Taliban, and hence drew the attention of law-enforcement authorities.

In early 2009, “it appeared that Finton was on the verge of taking action, so it was decided to proactively provide him with an opportunity for action that we controlled, rather than merely hoping to be able to find out and stop him”, according to a government affidavit.

He was introduced to an undercover FBI agent who began working with him to plot an attack, but Finton was repeatedly told he could walk away at any time, according to the justice department.

Eventually, Finton picked the federal building in Springfield as the target and, on Wednesday, he parked a van he believed carried one tonne of explosives at the location, the complaint said.

The two arrests come against the backdrop of the trial of an Afghan national accused of plotting attacks in the US.

Najibullah Zazi, who authorities said had links to al-Qaeda, appeared in a court in Denver on Friday before being flown to New York to face a charge of plotting attacks.

A prosecutor said Zazi had been determined to make a bomb and perhaps detonate it in New York City on the anniversary of the September 11, 2001, attacks, before he was thwarted by authorities.

Zazi allegedly received bomb-making instructions during a trip to Pakistan last year, then bought and prepared chemicals for use in home-made explosives like those used in the deadly bombings on London’s transport system in 2005.

Law enforcement experts have called the suspected conspiracy, if proven, one of the most significant security threats in the US since the 9/11 attacks.

Authorities say the cases of Smadi, Finton and Zazi were unrelated.

The three could face maximum life sentences for attempting to use a weapon of mass destruction if convicted. 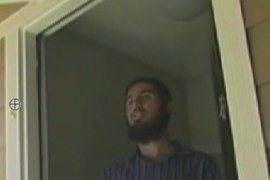 US security officials have indicated there may be a “terror plot” afoot in New York.