Villepin, 55, faces up to five years in jail and a 45,000 euro ($66,000) fine if convicted of “complicity in slander, complicity in the use of forgeries, dealing in stolen property and breach of trust” in the case that dates back to 2004.

He has repeatedly denied any wrongdoing and maintains that the case would have never gone to trial had it not been for Sarkozy’s “meddling” in the judicial process.

A former EADS vice-president and Villepin ally, Jean-Louis Gergorin is also on trial as is the former head of an EADS research centre, Imad Lahoud, who has reportedly confessed to falsifying the list.

Among the star witnesses are former spymasters including Yves Bertrand of the RG police intelligence and Mike Turner, former head of Britain’s defence giant BAE Systems.

Villepin is expected to take the stand to defend himself next week.

“This is the trial of an era,” said Robert, the investigative journalist among the five defendants.

“It is the trial of a kind of French political practice, where spooks and the powers that be use the legal system as a political tool.”

“We see that inside domestic intelligence circles there was a rift between those who were loyal to Villepin and those who were close to Sarkozy,” he told the AFP news agency. 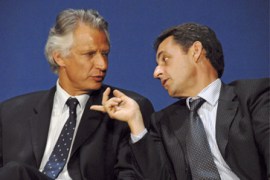