If elected, Hosni would become the first Arab to lead the agency.

But his candidacy has cause concern among some as last year he was quoted as having said he would burn Hebrew-language books.

He has also sparked anger among Muslim groups for calling the hijab a “step backward for Egyptian women”.

Hosni has apologised for his comments about burning Hebrew books, saying the comments were taken out of context.

His ministry has also been restoring synagogues in Cairo, the Egyptian capital, in what some people see as an attempt to win favour with the UN body.

While some have refused Hosni’s contrition and urged Unesco members to do the same, other prominent activists – including Serge Klarsfeld, the French Nazi hunter – have accepted Hosni’s apologies and backed him.

Kenneth Luis, the permanent delegate of Malaysia to Unesco, told Al Jazeera: “I believe the issue of the burning of books has been sorted out. What is more important now is to move forward with the right candidate.

“And we believe that a person coming from the Arab world should be given the opportunity to run this organisation.

“The danger is bringing politics into an international organisation. The members have to put aside politics.”

Another person in the running for the job, Benita Ferrero-Waldner, the EU external relations commissioner, withdrew her candidacy on Sunday.

The Austrian was considered a strong candidate, but fell behind Hosni and Bokova in the last round of voting.

She was said to be withdrawing “for the greater good of the organisation and European unity”, according to the Austrian foreign ministry.

Ivonne Baki, an Ecuadorian candidate, pulled out of the running late on Monday, leaving just Hosni and Bokova to battle it out.

Unesco, the United Nations educational, scientific and cultural organisation, provides protection of world heritage sites, as well as working in the areas of education, press freedom and “respect for shared values”. 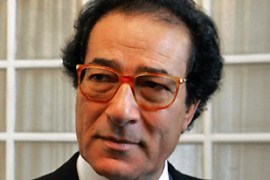