“The longer this government stays, the bigger the disaster is for the country. Give me just six months as prime minister, and I will bring this country back to normal,” he told his supporters.

“I plead for national reconciliation. I have already forgiven everybody, let’s start anew and decide in new elections.”

The Red Shirts, who form the United Front for Democracy Against Dictatorship, massed in front of the main government offices, echoing Thaksin’s demand for new elections.

“We came here today to mark the third anniversary of the coup, which has caused huge damage to the country,” Jatuporn Promphan, a Red Shirt leader, told the crowd as a thunderstorm drenched the protest site.

“This will be a peaceful protest and will end by midnight if the government does not use violence,” he added.

Organisers said the rally would move to the house of Prem Tinsulanonda, who the Red Shirts accuse of masterminding the coup, and who advises the country’s king.

About 9,000 soldiers and police were deployed in the city and an Internal Security Act imposed around the rally venue, allowing the military to close roads and make arrests.

Prime minister Abhisit said there were reports that unidentified groups of  troublemakers could set off bombs in the capital to create unrest.

“I am worried about the situation tonight and have warned intelligence agencies,” he said.

From early morning on Saturday, military checkpoints had been set up as well as barricades to contain any potential violence.

Violent street protests by Thaksin’s supporters and opponents have blocked roads, airports and government buildings and brought Bangkok to a halt twice in the past year.

Thaksin won landslide election victories in 2001 and 2005 but was overthrown in a coup.

He was convicted last year by the supreme court’s Criminal Division for Holders of Political Positions on conflict of interest charges in relation to a land purchase scandal.

Despite being in self-imposed exile, he remains an influential force and has sent almost daily video and audio messages to Red Shirt rallies, supporting their call for the current prime minister to resign and hold fresh elections. 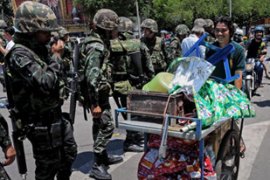 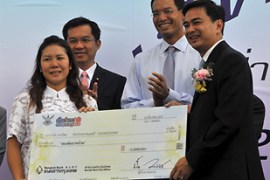 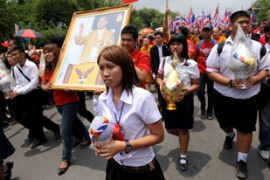 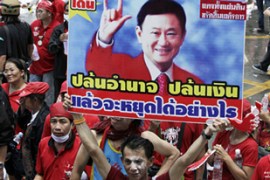