“We were preparing for the iftar when our apartment was shaken by such a heavy blast … that horrified and panicked our children,” said Riyadh Jabbar, a Mahmoudiya resident.

“Each time we begin to feel safe and secure, we are awakened by the thunder of blasts.”

Mahmoudiya is in what is known as the Triangle of Death because of the high number of attacks following the 2003 US-led invasion of the country.

Another road side bombing in the Saydiya district in southern Baghdad also injured two civilians on Friday, while a mortar fired at the diplomatic Green Zone in the capital did not cause any casualties.

Overall violence has dropped in Iraq over the past two years.

However, the number of deaths reached a 13-month high in August and attacks on civilians have continued.

There are now fears that Iraqi security forces will not be able to maintain control once US troops withdraw completely from the country by August 2010. 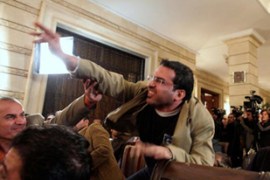 Muntadhar al-Zeidi, jailed for insulting George Bush, says he was beaten in custody. 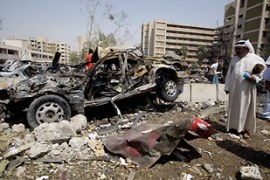 Officials to discuss Iraqi claim that Baghdad bombing perpetrators are based in Syria.

Iraqi shoe-thrower set to be freed