Barroso told the parliament he hoped to steer Europe out of the economic crisis and take action on the issue of excessive bonuses.

“I think it’s a moment of truth for Europe… If we don’t act together, Europe risks being marginalised.”

The 53-year-old also promised to fight “ugly nationalism” that questions “our achievements in European integration” and to appoint commissioners for immigration, climate change, justice and human rights.

Socialist, Green and Liberal leaders had criticised the president in a parliamentary debate on Tuesday, but made clear they were resigned to him winning.

Opponents said he was slow to tackle the economic crisis and that his programme lacked ambition, adding that he had not done enough in his first term to justify a second.

But supporters said Europe needed a leader of Barroso’s stature and experience to help it through the economic crisis and that failure to win a strong mandate would undermine the EU’s work.

Barroso faces a number of challenges, including a referendum on the EU Lisbon treaty in Ireland in October.

The Irish rejected the treaty last year and another rejection would block reforms intended to streamline decision-making in the EU and give it more clout. 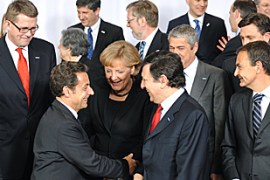