Opel employs 49,000 workers in Europe and has plants in Germany, Spain, Britain, Belgium and Poland.

Last Thursday, General Motors agreed to sell 55 per cent of the unit to Magna and Sberbank in an equal split, with GM keeping 35 per cent and Opel workers holding 10 per cent.

But the deal still hinges on conditions that could take weeks or months to work out, such as final agreement for government financing and union support for job losses.

John Smith, the chief GM negotiator, indicated last week that the Antwerp plant could be wound down, but Kris Peeters, premier of the region where the plant is located, said he was convinced the factory had a chance of surviving.

Belgium has asked the European Union to investigate the deal to make sure German is not violating anti-trust rules.

Angela Merkel, the German chancellor, gave her support to the Magna/Sberbank bid, pledging about $6.4 billion in loan guarantees as well as $2.1 billion in temporary loans to keep Opel afloat.

Under the agreement, Magna will take a 20 per cent stake in Opel and the Russian-owned Sberbank will take 35 per cent, giving their consortium a majority.

The consortium plans to work together with Russian car-maker Gaz to produce more than a million vehicles in Russia and Eastern Europe. 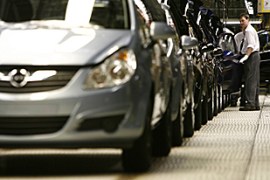