Iran, which says it is developing its nuclear programme for peaceful purposes, has ignored repeated UN Security Council ultimatums to halt the activity and has been punished with three sets of UN sanctions.

In April, the six powers called on Iran to enter negotiations by the end of September or risk further sanctions.

Steven Chu, the US secretary of energy, told reporters on the sidelines of a meeting of the International Atomic Energy Agency (IAEA) in Vienna: “Let’s say it’s an important first step and one hopes for the best.”

The six powers had called for urgent talks after Iran handed new proposals to their representatives on Wednesday.

Washington had expressed disappointment with the package, saying it was “not really responsive to our greatest concern,” but Moscow said it offered “something to dig into”.

According to a copy of the proposals obtained and published by Pro Publica, a US non-profit investigative journalism group, Iran said it was prepared to hold “comprehensive, all-encompassing and constructive negotiations”.

The talks would address nuclear disarmament as well as a global framework for the use of “clean nuclear energy,” the document said, without specifically referring to Iran’s own nuclear programme.

Foreign ministers of the six powers will meet on the sidelines of the UN general assembly in New York next week to prepare for the talks, Bernard Valero, a French foreign ministry spokesman, said on Monday.

They will be the first since the disputed re-election of Mahmoud Ahmadinejad, Iran’s president, in a vote in June that sparked Iran’s worst internal unrest since the 1979 revolution.

The Iranian president is also due to attend the general assembly meeting.

On Sunday, Ahmadinejad had said that Iran was ready to talk about global issues, but not to negotiate over Tehran’s right to nuclear technology.

“Having peaceful nuclear technology is Iran’s lawful and definite right and Iranians will not negotiate with anyone over their undeniable rights,” he said.

“It is obvious that the Iranian people will not negotiate about their undeniable nuclear rights,” he said.

But he added that Iran was trying to allay Western concerns that it is developing an atomic bomb under cover of its nuclear programme.

“As you saw, one of the objectives of the package is to certainly remove the concern about the nuclear issue by focusing on  global disarmament and implementing a slogan that nuclear energy is for everyone, but atomic bomb for no one,” he said.

Ghashghavi said the issue of global nuclear disarmament could act as a “good basis for discussions”.

Ali Akbar Salehi, the head of Iran’s Atomic Energy Organisation, also said Tehran was ready to discuss the issues in the package.

“But it is obvious we will not negotiate about our nuclear rights,” Iran’s IRNA news agency quoted him as saying in  Vienna.

Solana’s spokeswoman said the venue for October’s talks had not yet been decided. 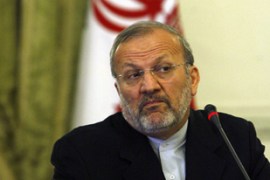 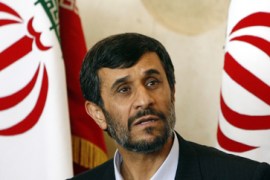 Will Tehran bow to growing international pressure over its nuclear ambitions?