General Stanley McChrystal, the commander of US and Nato forces in Afghanistan, last week sent an assessment of the military situation in the country to the White House.

The classified report does not ask for extra troops to be deployed to Afghanistan but analysts predict that a subsequent report could formally call for more soldiers to be sent to the battlefield.

A briefing on McChrystal’s report has taken place this week, administration officials have said, but Pelosi said she does not expect to be briefed until next week.

At least 68,000 US troops will be stationed in Afghanistan by the end of the year, following an order by Obama to send 21,000 more soldiers to the country.

Politicians in the House and senate have said that they require compelling evidence that an influx of more troops to Afghanistan will help overcome fighters linked to the Taliban and al-Qaeda.

Jim Moran, a Democratic member of the US congress, said “the majority of Democrats will continue to support President Obama, but that’s not to say we’re going to continue on the course in which we’re going”.

“Right now we need a better strategy … It is clear that Afghanistan does not lend itself to a military victory, it’s about economic development, it’s about building civil society. The military presence clearly is a problem in itself,” he said.

Still, he added that while Pelosi was right in saying there was “no appetite” for sending more US troops to Afghanistan, “there’s no appetite for taking cod liver oil but sometimes you have a situation where you just have to grimace and swallow it”.

While some officials say that sending more troops to Afghanistan will help overcome the resurgent opposition forces, others say that an overly large US presence will be seen by Afghans as an occupying force.

A report issued by the International Council Council on Security and Devlopment (ICOS) think tank on Thursday indicated that Taliban influence in Afghanistan was growing, with its fighters having a permanent prescence in 80 per cent of the country.

“Despite the presence of tens of thousands of foreign troops in Afghanistan, the return, the spread and the advance of the Taliban is now without question,” Norine MacDonald QC, president and lead field researcher for ICOS, said.

At the time of ICOS’s last report, November 2008, the Taliban had a permanent presence in 72 per cent of the country – and in the previous year it had been just 54 per cent.

August was the deadliest month for US soldiers in Afghanistan since the invasion in October 2001 with 51 being killed.

Max Boot, a national security fellow at the Council on Foreign Relations, said that although the US public was “frustrated” by a perceived lack of progress in Afghanistan, support for the war remained higher than for the conflict in Iraq in 2006.

“We have been able to be succesful there and turn around, not only the situation on the ground, but also public opinion which has become supportive of the war effort in Iraq as it has become more successful,” he told Al Jazeera.

“I foresee a similar turnaround, assuming that we commit the resources necessary, in Afghanistan.”

Obama’s administration has called on legislators to assist in formulating a list of benchmarks that the government could then use to measure the efficacy of US strategy in Afghanistan and neighbouring Pakistan, where the Taliban and al-Qaeda have bases.

Pelosi said she was “more interested” in those recommendations, which are due in two weeks, than in the McChrystal report.

A decision on whether to deploy more soldiers to Afghanistan is unlikely to be made for several weeks, administration officials have said. 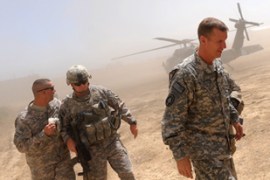 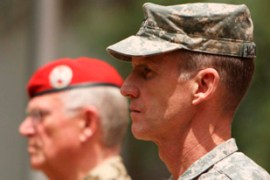 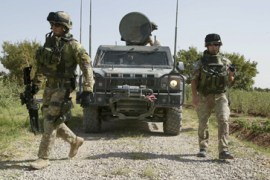 US warns of tough Afghan battle

US commander says difficult year ahead despite Obama’s order to deploy 17,000 more troops.