“There’s so much to clean up … so much damage to infrastructure … it’s not going to be done until this current weather pattern that has menaced the western part of the city so substantially has actually passed,” she said.

She added that looting of evacuated houses was a problem “almost immediately”.

“The government has made arrest in the last 24 hours, but what has emerged is that gangs of looters were coming down from other parts of Turkey,” she said.

“They’d hired cars to come down and see what they could make from what they assessed was impending chaos in the nation’s biggest and most prosperous city.

“It’s led to people shaking their heads and saying ‘well the looters were more organised that the government was’.”

Earth movers have begun lifting debris at a lorry parking lot where 13 drivers drowned on Wednesday, and authorities said they may recover more bodies as they clear up.

Recep Tayyip Erdogan, Turkey’s prime minister called the floods the “disaster of the century”, after the heaviest rainfall in at least 80 years turned highways into rivers.

He has promised to strengthen river banks, while the country’s interior ministry vowed to compensate Istanbul residents affected.

The Istanbul mayor’s office said in a statement on Wednesday that about 900 firefighters and rescuers were working in the flood area, backed up by 220 vehicles and 30 inflatable dinghies.

The statement said that more than 1,000 people had been rescued since Tuesday when the rains first battered the western outermost suburbs of Istanbul before moving over the city.

Istanbul is situated on the steep banks of the Bosphorus strait, one of the world’s busiest waterways and a major conduit for cargo ships and oil tankers from the Black Sea.

Elsewhere in northwest Turkey, two bridges were demolished by floodwaters on the Bahcekoy-Saray highway. 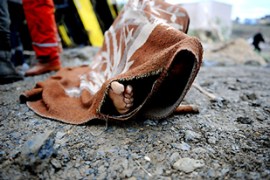