Al Jazeera’s correspondent in Latin America, Dima Khatib, is the only foreign correspondent travelling with Hugo Chavez, the Venezuelan president, as he embarks on a diplomatic visit to a number of North African, Middle Eastern, European, and Central Asian countries.

She is keeping a daily reporter’s diary as part of our special coverage of his diplomatic tour.

I must admit I could not think of the name of Turkmenistan’s capital when I was told by one of Chavez’s aides that it would be added to his diplomatic tour.

We were principally in Turkmenistan because the country is estimated to hold some 20 per cent of the world’s gas reserves.  Still, with that fact in mind, why would Chavez have to go there himself – there are after all so many countries he has not visited and who have one thing or another that would make them important.

I told myself it is Chavez’s style. He likes to do things himself knowing the message will be different when he appears before world media – from Turkmenistan.

But I had no idea what to expect. This is after all a former Soviet republic, bordered by Afghanistan, Iran, Uzbekistan and Kazakhstan. Central Asia was one of few regions in the world I had not yet visited.

The first thing that struck us was the way we were treated as members of an official delegation. As soon as we landed, two men would not leave our side, insisting on taking us immediately to the bus allocated for the ‘official press’ when we wanted to stay close to Chavez, as we always do, while he was being received at the airport.

As I was one of very few on the delegation who speak English, it was up to me to communicate with our two care-takers.

“How many journalists are you?” they kept asking and asking.

I must have told them no less than five times: ‘two cameramen, one photographer, 3 journalists and Chavez’s communication director’.

Chavez on his own

Driving from the airport to the centre of the city, Ashgabat looked like it was part of a cartoon film. The buildings were all brand new, illuminated as if on display in a museum. Everything looked picture-perfect.

But it was so dead quiet and there was absolutely no body on the extremely clean and very well paved streets.

I noticed the influence of Islamic architecture.

We were all taken to a fancy hotel except for Chavez who was taken to a special residence across the street where he was to stay himself – something he does not usually prefer. But this was the way of Turkmen hospitality.

Our care-taker Mourad turned up in the morning and told us we were to leave to the Presidential Palace before the rest of the delegation so we would go through security checks.

I could not recall any other country I have visited with Chavez where such measures were imposed on the accompanying press. We all wondered whether that was inherited from the Soviet era.

We were searched thoroughly and our cell phones taken before entering the palace.

Chavez’s communications director wanted to smoke a cigarette while waiting for the presidents to arrive. “You can only smoke in public areas in Turkmenistan,” Mourad said.  But we were standing in the entrance of the palace, out in the open air.  He said: “This is the air of the palace, it is not public air!”

It was exciting to know that Chavez is the first Latin American head of state to ever come to Central Asia; Venezuela is opening yet again new frontiers.

We were taken to a huge horse riding track (the hippodrome) where we were shown beautiful horses and offered local food. Everything there was extravagant.

As we were driven back to the airport after having spent less than 12 hours in the country, we were still wondering where the inhabitants of Ashgabat were, where they lived, whether they were poor or rich, etc.

We had still not seen a single bus or bicycle, nor people walking on the street, nor heard any noise of anything. It was a city without a soul, almost without life. We were told the new buildings are future housing for the poor.

As we looked down from the plane, we finally saw thousands of humble houses that looked full of life. That is where Ashgabat’s soul lies.

From Libya to Algeria, Syria, Iran and Turkmenistan, I have been jotting down the daily events during Chavez’s visits and the people he has met. Often, news events have kept me from filing them as soon as I had hoped.

Nevertheless, our trip to Iran was indeed a memorable one.

It was actually just past 1am when we landed in Tehran on Saturday. Unlike the vibrant Arab capitals we had just visited, Tehran seemed asleep and dark with no Ramadan night life at all.

The thought of being part of the first presidential delegation to visit Iran since the re-election of Mahmoud Ahmadinejad, the Iranian president, was exciting – even more so with the new cabinet having received a vote of confidence in parliament only a few days earlier.

The new cabinet would actually be receiving the Venezuelan delegation before it had even held its first meeting.

Ahmadinejad received Chavez as a close friend at the presidential palace and they walked to greet both the Iranian and Venezuelan officials standing in the courtyard of the palace.

While greeting the ministers from both sides, the two leaders already began talking about some issues on the agenda, so it took them about 50 minutes to finish the official reception ceremony.

When Chavez introduced me, I immediately said: Assalamu Alaikom. Ahmadinejad greeted me back and said he remembered me from Chavez’s last visit in April when I spoke to him in Arabic.

This time he asked me to provide Al Jazeera with information on what is really happening in Iran. He had the same simple look of an ordinary man, with very humble clothes and down-to-earth attitude.

As usual, talks between the two leaders were behind closed doors but I learnt that they discussed what we had thought to be a joke in Damascus: grouping countries from the “Axis of Evil” in a new international alliance.

Chavez’s proposal was to call it the Alliance of the Hard-liners and he said it would be “triple A”: ALBA (Chavez’s own Bolivarian Alliance for the Americas in Latin America), Africa and Arabia.

I told Al Jazeera Arabic viewers all about that in a live interview from Al Jazeera’s office in Teheran late that night. It was my first ever live appearance on TV veiled. I will never forget that.

On Sunday, we headed to Mashhad, Iran’s religious capital. The flight was one-hour long and we landed just as the sun was setting and people were rushing to break the fast.

At first we were told women were not to be allowed into the Mausoleum of the Great Imam Reza, but then they decided to make an exception. We had to be wrapped in the Iranian typical chador cloth and we obviously had to take off our shoes.

There were four of us – three Venezuelan women and myself, in a sea of men inside. We were kept waiting for a long time while men were allowed in and out.

When we were finally let into the area where the rest of the delegation was, we were surprised to find them all sitting on the floor, having iftar (breaking the fast). Chavez was sitting on his knees next to Ahmadinejad.

He is the first non-Muslim leader to ever visit this important Shia pilgrimage destination.

“I had two yogurt drinks,” said Chavez when I asked him about the food. “I don’t think I can get up. I feel so full,” he continued, and everyone laughed.

But he did get up and we headed to another hall of the amazingly-decorated monumental building.

I sat on the floor all wrapped up like an Iranian lady while the two leaders gave a press conference and their ministers signed agreements. Iran is to provide Venezuela with medicine and vaccines, and much more.

The two countries also activated a joint fund for development projects with an initial capital of $200mn.

As we left the holy place, the shoving and pushing got rough as people tried to touch and greet Chavez.

One little Iranian boy ran to Chavez who carried and cuddled him. He would keep coming back for more attention and Chavez would say: “It is little Mohammad again!”

Ahmadinejad passed right next to me as he was returning back into the Mausoleum and he gave me another one of his wide smiles and nodded to me humbly.

Minutes after Chavez left Mashhad, the Ahmadinejad’s new cabinet met for the first time. But everyone will remember that before it even took office officially, its ministers had already signed agreements with Iran’s vital ally.

On Sunday, we left Iran for Turkmenistan.

To read Dima Khatib’s diary accounts of Chavez’s visits to the Arab World before arriving in Iran, click here. 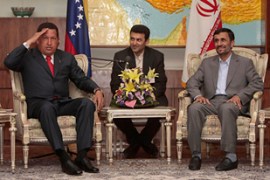 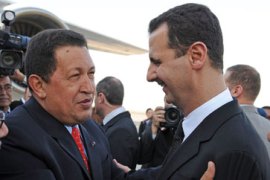 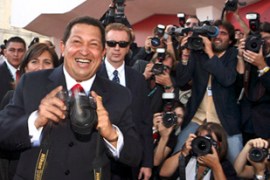 Venezuelan leader recieves film star’s welcome at premiere of documentary about him. 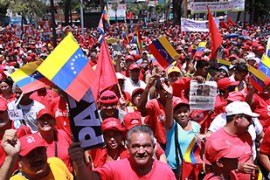