The missing included 21 women and seven children who were believed to have been sleeping below decks when the ferry sank shortly before midnight on Wednesday.

The Princess Ashika was travelling from the Tongan capital Nuku’alofa to outlying Ha’afeva island, when it rolled over and sank in high waves about 86km northeast of the capital.

“The hopes for the rest are not promising, unfortunately,” he told reporters in Australia, where he was attending a meeting of Pacific leaders.

“It’s a very sad day… it’s big for a small place. This is a huge disaster, a huge loss, we’ll try and cope with it as best we can.”

Ferries are an essential mode of transport in Tonga and elsewhere in the Pacific.

The last maritime disaster in the region occurred last month near the island of Kiribati, where a ferry sinking left 33 people dead.

Chris Kelley, the Tongan police commander told a news conference in Nuku’alofa that there was difficulty reconciling the numbers on board the ferry, with 15 of the survivors not even on the passenger list.

“We believe a more accurate manifest was on board and was lost so there could have been more persons on board who have not been identified,” he said.

Sevele said the cause of the sinking was unknown and although questions have been raised about the vessel’s seaworthiness, he said it had passed safety inspections and was found to be suitable for insurance.

But many Tongans had expressed concerns about the safety of the ageing vessel, which had been sent from Fiji this year to replace another ferry that was no longer deemed safe.

The Princess Ashika was to be used until 2011 when a new ferry, currently under construction, is due to go into service. 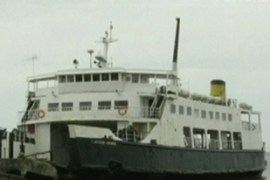 One person killed and scores missing as ferry goes down off of Tonga.