Sharif said that the US pledges of assistance need to be backed up with action, but defended the relationship that the Somali interim government has with Washington.

“There were promises on the security front, on the humanitarian front and for the people injured in the fighting,” Sharif said.

“If these promises materialise, they will be very helpful to the people of Somalia.

“Somalia needs to have relationships in order to lift the Somali people out of the difficult situation we have found ourselves in.”

Clinton accused al-Shabab, which controls most of Somalia’s south, of trying to turn the country into a base for global terrorism.

The US has already offered military aid to Mogadishu, including more than 40 tonnes of ammunition and training for security forces.

Clinton also pledged to take action against Eritrea if it does not stop what she called “unacceptable” interference in Somalia.

“It is long past time for Eritrea to cease and desist its support for al-Shabab and to start being a productive, rather than a destabilising, factor,” she said.

Eritrea has denied allegations of supporting rebels in Somalia.

Al Jazeera’s Mohammed Adow, reporting from Nairobi, said the meeting shows the US is “desperately trying to ward off a complete takeover of Somalia” by al-Shabab fighters.

“While Sheikh Sharif’s government may be weak, it is the only hope for countries like the United States to try and find a way in which its interests can be solved in Somalia,” Adow said.

“[The meeting comes] even though the US three years ago sanctioned the toppling of an administration led by Sheikh Sharif Ahmed himself.

“It just shows you the desperation. This is the man the United States just a few years ago declared to be a terrorist.”

The interim government in Somalia has little power outside its base in Baidoa, a city lying about 260km northwest of Mogadishu.

Two urgent issues should be addressed if the administration is to begin extending its influence, Ali Khalif Galaydh, a former prime minister of Somalia, told Al Jazeera.

“The first one is security. If the interim government is incapable of holding on to at least Mogadishu, then there is very little else that can be done.

“I think the second factor is that there is a desperate need for engagement, for dialogue, for a way to enage the Shabab and their allies, Hizbul Islam. Unless that is done, only the barrel of the gun will determine the shape of things to come.”

“What the government and their international supporters need now is to come up with the requisite resources, not only military. I think what is needed here is political leadership, skills and resources.”

Somalia has suffered from lawlessness and violence since 1991, when the country descended into civil war.

Ahmed, who was elected in January under a UN-brokered process, is part of Somalia’s 15th attempt to set up a central government in nearly two decades. 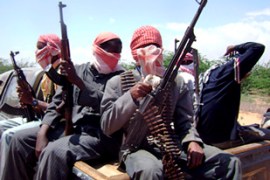 US secretary of state meets with nation’s president for talks on quelling violence. 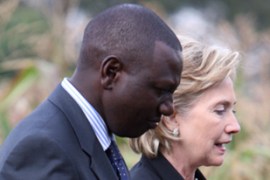 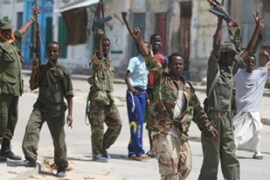 The meeting comes as Somalia is ravaged by heavy fighting.