Al Jazeera’s James Bays, reporting from Kabul, said: “This news conference and this visit comes just 48 hours into his new job, and he said that was very significant … and that he saw Afghanistan as his very top priority”.

Rasmussen, a former Danish prime minister, was also due to meet US General Stanley McChrystal, the commander of international forces, during his visit.

He was also expected to hold talks with Kai Eide, the UN special representative, and visit troops appointed to carry out construction work in the provinces, Nato said.

Rasmussen has said he wants Afghan forces to take responsibility for security in the country within the next five years.

In his first major speech as the military alliance’s head on Monday, Rasmussen said Nato would be there to support Afghans when they assume control from the US-led military operation in Afghanistan for “as long as it takes”.

But he said doing so means “helping them stand on their own feet”.

Nato took over some operations in Afghanistan six years ago, but a rising number of civilian casualties because of attacks by western forces has fuelled Afghan anger.

Rasmussen took up his new post on August 1, assuming control from the Netherland’s Jaap de Hoop Scheffer, who held the role since 2004. 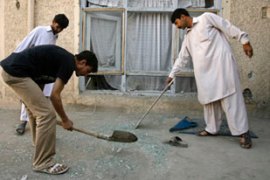