Men and women standing on both sides of the road openly wept as the truck crawled through the swelling crowd for the 18km journey to the Manila Memorial Park, where she was to be buried next to her husband, Benigno “Ninoy” Aquino.

A military helicopter also flew overhead, sprinkling the crowd with yellow confetti, the colour of Aquino’s 1986 “people power” revolt which restored democracy to the Philippines, while ships anchored on nearby Manila Bay blared their horns.

Aquino was highly revered in the Philippines for her role in toppling dictator Ferdinand Marcos in 1986 and restoring democracy to the country.

Her husband, Benigno, had been assassinated at Manila airport three years earlier as he returned home to challenge Marcos’s grip on power.

Ahead of Wednesday’s funeral friends, family and an estimated half a million ordinary Filipinos filed past the former president’s coffin as she lay in state.

On Wednesday morning, Gloria Arroyo, the current Philippine president, made a brief pre-dawn visit to the cathedral to pay her respects.

In recent years, Aquino had been sharply critical of Arroyo, calling on her to resign over allegations of corruption and vote fraud.

However, she was pointedly excluded from the invitation-only mass that was also attended by two past presidents, Fidel Ramos and Joseph Estrada, as well as foreign diplomats.

The family had rejected Arroyo’s offer to hold a state funeral, reflecting the tense relationship between the only two Filipino women to have led the fractious Southeast Asian nation of 90 million people.

Aquino’s stature in Philippine politics was such that even former military commanders who had plotted coups against her also lined up to pay tribute.

“Her aura was her armour. You couldn’t possibly hurt her,” said retired navy commodore Rex Robles, who as a young colonel was among a group of officers who sought to topple Aquino in the late 1980s in one of seven attempted coups during her presidency.

Another former coup leader, Brigadier-General Danilo Lim, who as a captain joined one of the bloodiest attempts to oust Aquino in 1989, said that while he had “an uneasy history” with her as president, she would be remembered as a “guiding light” of democracy. 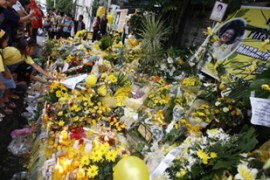 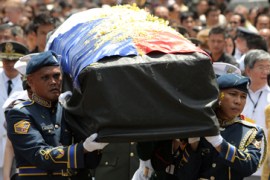 Manila at standstill for Aquino

Thousand of mourners gather to pay their respects to late former president. 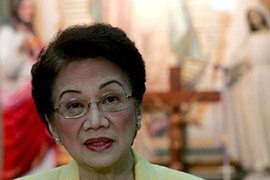 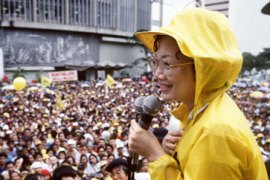