The two who worked for the California-based Current TV co-founded by Al Gore, who was Clinton’s vice-president, were found guilty after a trial and sentenced to 12 years of hard labour in June.

The reporters’ families said they were “overjoyed” by the pardon and “so grateful to our government … for their dedication to and hard work on behalf of American citizens”.

“We especially want to thank President Bill Clinton for taking on such an arduous mission and Vice-President Al Gore for his tireless efforts to bring Laura and Euna home.

Clinton was greeted warmly on his arrival and had what KCNA described as an “exhaustive conversation” over dinner with Kim and his senior aides.

State media said Clinton apologised on behalf of the women and relayed a message of gratitude from Barack Obama, the US president.

“Clinton expressed words of sincere apology to Kim Jong-il for the hostile acts committed by the two American journalists against the DPRK after illegally intruding into it.

“Clinton courteously conveyed to Kim Jong-il an earnest request of the US government to leniently pardon them and send them back home from a humanitarian point of view,” KCNA said.

The state news agency added that the visit would “contribute to deepening the understanding between the DPRK and the US and building the bilateral confidence”.

But the White House had a different view, saying that reports of a message from Obama were “not true” and taking pains to emphasise the private and limited nature of Clinton’s trip.

David Axelrod, an adviser to Obama, told MSNBC that Clinton was on a “private humanitarian mission” and that “I don’t think it’s related to other issues”.

Clinton’s visit had raised speculation that he may discuss other issues with the North Koreans such as getting back to negotiations over their nuclear programme.

Christopher Nelson, an Asia analyst in the US who edits the Nelson Report on international affairs, told Al Jazeera that more needed to come from Clinton’s visit than the release of the journalists for it to be considered a success.

“We’ll need to see ‘what next’. Did sending somebody of the stature and importance of Bill Clinton, does that serve as a door opener, a bridge opener … a face-saving vehicle for the North Koreans to come back to talks about denuclearisation?”

The journalists’ release followed weeks of quiet negotiations between the US state department and the North Korean mission to the United Nations, said Daniel Sneider, associate director of research at Stanford University’s Shorenstein Asia-Pacific Research Centre.

Clinton “didn’t go to negotiate this, he went to reap the fruits of the negotiation”, Sneider told the Associated Press.

Pardoning Ling and Lee and having Clinton serving as their emissary served both North Korea’s need to continue maintaining that the two women had committed a crime and the Obama administration’s desire not to expend diplomatic capital winning their freedom, Sneider added. 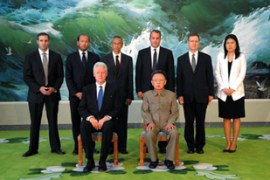 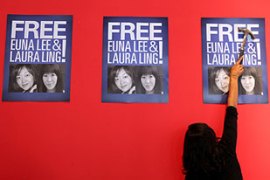