Nogovitsyn said he did not believe that the former Soviet republic was capable of launching another offensive against South Ossetia.

“The political situation has radically changed,” he said.

“Not to understand this and continue acting according to the old schemes is just suicidal [for Georgia’s leadership].”

The United States, Georgia’s main ally, helped arm the country before the war but says it is now focusing on improving the education and professional standards of Georgia’s military, not on resupplying it with equipment lost in the 2008 war.

Last month, Joe Biden, the US vice president, visited Georgia and held talks with leaders in an effort to convey support for the country – despite Washington’s recent overtures to improve ties with Russia.

Tkeshelashvili said Georgia was focused on rebuilding its “defensive capacities” in line with Nato standards and pointed out that any Georgian military movements are monitored by 240 European Union observers.

“Any military base, any police station, any movement of our military or even police forces at any time without prior notification can be monitored and can be observed and assessed by the [EU monitoring] mission,” Tkeshelashvili said.

In rare praise from Moscow on Wednesday, Russia commended the role of the European Union Monitoring Mission (EUMM).

During an interview with the state news channel Vesti 24, Sergei Lavrov, Russia’s foreign minister, said: “The presence of the EU monitors … is an important stabilising factor and we welcome it.”

The EUMM is the sole international presence around Georgia’s de-facto borders with South Ossetia and Abkhazia after both the United Nations and OSCE monitoring missions left after Russia opposed a renewal of their mandates.

Lavrov said Mikheil Saakashvili, Georgia’s president, and his “masters of provocations” wanted to see the US join the EU mission in a bid to inflame tensions with Russia.

Last year’s conflict helped worsen Moscow’s relations with Washington but those tensions have eased since with meetings between Barack Obama, the US president, and Dmitry Medvedev, his Russian counterpart.

Since the conflict Russia has built up its military presence in both South Ossetia and Abkhazia, and has recognised both as independent.

The five-day war, when Russia repelled a Georgian assault on South Ossetia and sent tanks into Georgia proper, shook Western confidence in oil and gas routes running through the South Caucasus. 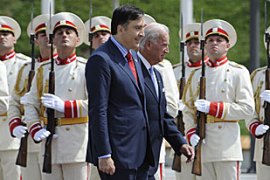 Russia warns against remilitarisation of Georgia as US vice president backs Nato bid. 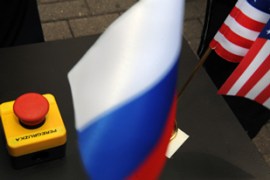 US president underscores “common interests” with Russia as he leaves for Moscow visit.