The negotiations are “a base to reach a peaceful solution,” he said, despite the fact that Roberto Micheletti, the interim president of Honduras, has rejected peace plans that would see Zelaya be reinstated.

Mariana Sanchez, Al Jazeera’s correspondent in Mexico City said: “Mexico is considered the big brother of Central America so it is very important for Zelaya to come here and get the support of Calderon.

“Zelaya is launching what he has called a diplomatic crusade. He needs the presidents of Latin American to continue voicing their support. He intends to go to Brazil in the next few days another very important country.”

Honduras’ political rivals have remained deeply polarised since Zelaya was forced from the presidential palace and into exile by the military on June 28.

The crisis has threatened a wider fight between supporters of Zelaya and those loyal to the interim government, while the military has been deployed across the country.

Police said on Tuesday that a 45-year-old man was killed late on Monday when a soldier opened fire on his car after it failed to stop at a military checkpoint.

At least five people have been killed in Honduras since the interim government took power.

Zelaya last week crossed a few metres into Honduras from Nicaragua, as part of a challenge to the interim administration.

However, the military, which has orders to arrest Zelaya, prevented him from advancing any further into Honduras and the deposed leader returned to the Nicaraguan side of the border.

Zelaya has said that he had set up a “popular army” of more than 300 Honduran supporters who gathered with him in Nicaragua, as part of his challenge to Micheletti.

The coup in Honduras came on the same day that Zelaya planned to hold a referendum on making changes to the constitution.

The Honduran congress, supreme court and military had all declared the non-binding public vote illegal, accusing Zelaya of trying to make changes to presidential term limits in order to win another term in office.

Zelaya has denied the allegations, saying that constitutional reform is needed to improve the lives of the poor in Honduras. 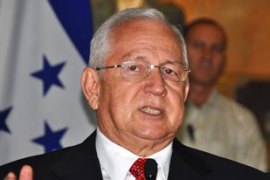 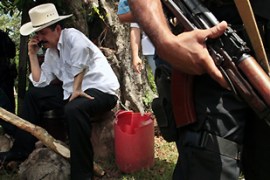 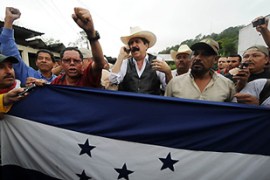 Ousted Honduran president criticises US secretary of state for “evading the topic”. 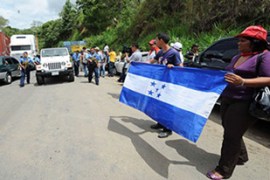 The ousted president says he will keep coming back until he is allowed back to the country.