“In fact, Bank of America had already contractually authorised Merrill to pay up to $5.8bn in discretionary bonuses to Merrill executives for 2008,” the SEC said.

The SEC said that Bank of America’s agreement to allow Merrill to pay the bonuses was in a separate document that was omitted from those given to investors “and whose contents were never disclosed before the shareholders’ vote on the merger”.

“As Merrill was on the brink of bankruptcy and posting record losses, Bank of America agreed to allow Merrill to pay its executives billions of dollars in bonuses,” David
Rosenfeld, associate director of the SEC’s New York Regional Office, said in a statement.

“Shareholders were not told about this agreement at the time they voted on the merger.”

Bank of America is one of the largest recipients of government aid paid out in an attempt to tackle the financial crisis. It has received $45bn from the federal $700bn bank rescue programme.

On Monday, the bank announced that some of its senior executives had been given new positions and that some of the managers might be in a position to succeed Ken Lewis, the chief executive officer.

The bank is under pressure from the federal government to improve its performance but Robert Stickler, a Bank of America spokesman, said the government had nothing
to do with the job changes. 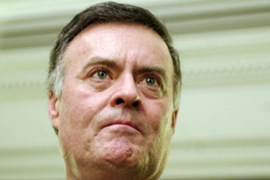