Zabul is one of Afghanistan’s most troubled provinces. Tens of thousands of foreign troops are deployed in the area to battle Taliban fighters.

Earlier on Tuesday, at least seven rockets were fired into the heart of the Afghan capital, Kabul, in a rare attack that comes less than three weeks before presidential elections.

Police said that at least one child was injured in the attack on what is thought of as one of the safest parts of the country.

Said Abdul Ghafar, the Kabul police chief, said that one rocket landed in the Wazir Akbar Khan diplomatic area, home to various embassies, including the US embassy, as well as the Nato-led force headquarters in Afghanistan.

He said that the rest landed elsewhere in Kabul, at least one in a residential neighbourhood.

A few rounds of gunfire followed the rockets.

A police officer in eastern Kabul said that it was not clear why the shots had been fired but that security forces were all on alert.

Al Jazeera’s James Bays, reporting from Kabul, said that rocket attacks on the capital were now unusual in war-torn Afghanistan.

“Attacks like this are very, very rare in Kabul,” he said.

“This city used to come under regular rocket attack during the civil war, also during the period after the fall of the Taliban government in 2001 and 2002 there were occasional rocket attacks, but it is something that is now not common.”

The Kabul attack has further raised tensions ahead of Afghanistan’s presidential election, due to be held on August 20.

The election commission has warned that about 700 polling stations may not be open because of the security situation.

Hamid Karzai, the president, has done minimal campaigning ahead of the vote but traveled on Tuesday to the eastern city of Gardez, the scene of an assault by Taliban that killed six Afghan police and intelligence officers late last month.

“The Afghan people are happy because you have paved roads, built schools, and the salaries of the government are paid by the international community and United States, but we want all our prisoners to be released,” he told a crowd gathered in front of a mosque.

“My first wish and aim is to bring peace and security all over the country,” he said. 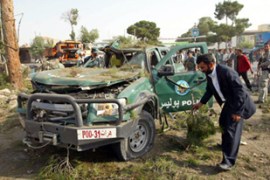 Attack in western province of Herat kills at least 12 people and wounds 26 others. 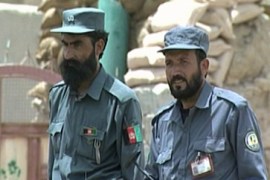