Myanmar’s offensive has thrown into question the future of the free-wheeling Kokang buffer zone, which is largely ethnic Chinese and where drug trafficking and gambling have long underpinned the economy.

Thousands of people have fled to the border town of Nansan in China’s Yunnan province this month after clashes in Kokang, following the deployment of Myanmar government troops in the area.

Speaking to Al Jazeera on Saturday, Kitty McKinsey, a UNHCR regional spokesman, said: “The Chinese in Yunnan have given the tens of thousands of refugees crossing into China aid and medical care. About 30,000 have crossed over.

“These people seem to have appeared from nowhere. UNHCR is not on the ground in Kokang, we don’t operate there. I do believe this [turn of events] took a lot of people by surprise.”

The battle erupted after the Myanmar military moved into the area as part of efforts to ensure ethnic groups participate in elections next year, according to reports by Chinese media and Myanmar exile groups.

One of those groups, the US Campaign for Burma, said in a statement early on Sunday that about 700 troops from the Kokang militia had fled to China and surrendered their weapons.

Myanmar groups in exile say the fighting began after the Myanmar military took control of facilities run by the Kokang Myanmar National Democratic Alliance Army (MNDAA), in Laogai, the capital of Shan.

The MNDAA had observed a ceasefire with the Myanmar government since 1989.

China has called on Myanmar to maintain stability in the border region and urged more measures to protect the security and legal rights of Chinese citizens there.

Many of the fleeing men said they escaped on Saturday after the latest burst of fighting.

“We are soldiers from the Kokang army. But we had to give up. The fighting was too much,” Xiong Zhaole told the Reuters news agency in Nansan.

Xiong said he and his companions had been told by Chinese soldiers who received them at the border to swap their army greens for blue outfits, abandon any plans to fight and find somewhere to stay with relatives or in refugee camps.

Another man who abandoned fighting the advancing Myanmar troops and fled to China said the battle had turned against the local militia.

“We were humiliated by them,” said Li Yingshu, a 25-year-old wearing the blue bodysuit given out by Chinese authorities. “We were not able to keep on fighting.”

Commenting on the government’s moves in Myanmar, Aung Zaw, editor of the Irrawaddy magazine, told Al Jazeera: “[Action] is being taken against the Wa Chinese minority who are living in the Kokang area.”

The Wa are one of China’s more than 50 ethnic groups, and have a population of around 400,000 in China alone, with more living in Myanmar.

“I have been told around 2,000 Wa soldiers [militia members] are stationed in Kokang. At the same time, the Burmese [forces] are requesting more reinforcements.

“Chinese authorities have told me that if the two sides could not resolve the situation in the next two days, it could lead to a full-blown conflict.” 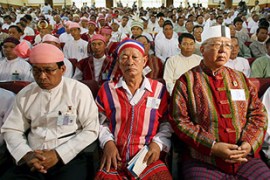 Standoff with military sparks mass exodus of minority groups in the northeast.