Abdel Mounim is said to have operated an investment company in Egypt which allegedly took money from investors and placed it in an Ponzi scheme – where new investors’ money is used to pay fake returns to older investors.

The charges were levelled against Abdel Moneim after she defaulted on bank loans and following complaints that she had not delivered property that she had sold. 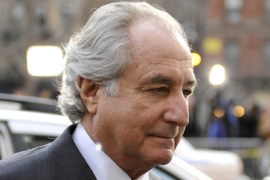 What is a Ponzi scheme?

Ponzi schemes are a type of fraud which offer investors high and consistent returns.