The Asahi poll predicting that the LDP “looks certain to suffer a crushing defeat” came as Aso admitted on Thursday that voters were dissatisfied with his party’s performance.

“I think criticism has been building up” towards the government, Jiji Press news agency quoted Aso as saying while on a campaign trail in the western city of Osaka.

“We have failed to make clear the virtues of conservatism,” he said. “We regret we haven’t sent a clear message in the past few years.”

The DPJ headed by Yukio Hatoyama had 112 seats in the lower house before parliament was dissolved in July, while Aso’s LDP which held 300 seats before the elections is now set for a crushing defeat.

Hatoyama’s opposition party was founded and is run by defectors from the LDP, so both sides share broadly conservative stances on major issues.

The ruling LDP has watched its support plummet because of the fragile economy, increasing unemployment, a perceived lack of leadership and its support of higher taxes.

Aso, who is the party’s president, is widely seen as a weak leader. Recent polls showed his support rating was at less than 20 per cent.

The DPJ’s Hatoyama on the other hand is proving to be increasingly popular among voters and has pledged reforms in the domestic and international politics, including a review of Japan’s relationship with the United States.

The opposition party has long accused LDP governments of serving as yes-men to the US, especially in supporting its military actions, and has sworn to take a harder line in negotiations.

Hatoyama, in a New York Times editorial published on Thursday, said the US-Japan alliance would “continue to be the cornerstone of Japanese diplomatic policy”.

“But at the same time, we must not forget our identity as a nation located in Asia,” he wrote.

The DPJ has promised to cut 1.3 trillion yen ($13.8bn) from the 7.9 trillion yen budget for fiscal 2009 by axing public works projects, so it can use much of the money for more generous social welfare spending.

In 2007, the party won control of the less powerful upper house but has never controlled the lower house or the Japanese cabinet. 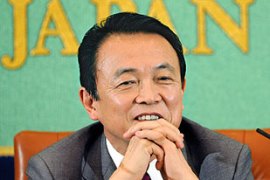 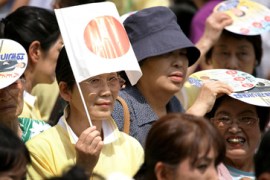 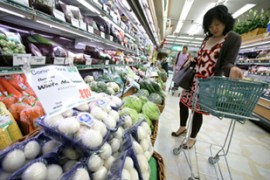