After years of delays, South Korea successfully launched its two-stage Korea Satellite Launch Vehicle 1 (KSLV-1) from the Naro space centre in the south of the country on Tuesday, but Lee Myung-bak, the president, called the exercise only a “half success”.

“We must further strive to realise the dream of becoming a space power,” Lee’s office quoted him as saying after the satellite failed to achieve its intended orbit.

South Korea spent more than $400m on the satellite and rocket, the first stage of which was built in Russia and the second stage by South Korea.

The failure to send the satellite into orbit was a blow to Seoul’s quest to become only the 10th nation in the world capable of launching satellites independently from its own territory.

The Russian space agency, Roscosmos, and the state-controlled Khrunichev company which made the rocket’s first stage, said the first stage of the rocket operated as planned.

The 100kg experimental satellite, also built by South Korea, was aimed at observing the atmosphere and oceans, and South Korean officials said the mission had only peaceful, scientific motives.

Among Asian countries, China has conducted a manned space flight, and Japan and India have also sent rockets carrying satellites into space.

Neighbouring North Korea launched its own three-stage rocket on April 5 claiming it sent a communications satellite into orbit, but which critics say in reality was cover for a test of long-range missile technology.

Pyongyang lashed out at UN sanctions imposed after its April launch and had warned that it would be closely watching international reaction to the South’s rocket launch for any signs of a double standard. 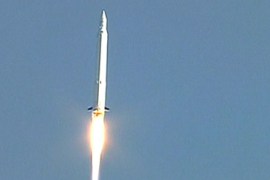