Another survey of financial market investors, the ZEW, pointed last week to better times ahead for Germany, while hard data such as industrial orders have also been better than expected in recent months.

A further poll, published on Wednesday in Stern magazine, showed that 39 per cent of people thought the worst of the economic crisis was over, compared to only 12 per cent who held that opinion one year ago.

The rise in business sentiment caught many analysts by surprise, with those polled by Dow Jones Newswires having predicted a rise to 88.8 after 87.4 in July.

Koch said that Germany, which is heavily dependent on exports, should get a boost as the global economy recovers from its worst downturn since the Great Depression in the 1930s.

“Notwithstanding the latest impressive acceleration, the rally in business sentiment is likely to continue in the short term,” he said.

“The hard-hit export champion will now in turn benefit disproportionately from the pick-up in industrial demand around the globe.”

With just over four weeks to go until elections in Germany, the positive mood is likely to boost the campaign of Angela Merkel, the German chancellor, whose Christian Democrats are riding high.

She has said that the worst is probably over.

Other economists warned against calling the start of a recovery prematurely.

“While the near term looks bright, there are still at least two impediments to a real recovery – the worsening labour market and a possible credit crunch,” said Carsten Brzeski, senior economist at ING, the Dutch bank.

Although job losses have been limited by a government scheme offering incentives to firms to put employees on part-time work, unemployment has started to rise and experts have warned that worse is to come.

“They are carrying something like $1 trillion of toxic debt and what we’re seeing right now is that the government of Angela Merkel has been very careful, in many ways, of not letting that information spill out into the economy because they are very worried about the upcoming election on September 27.

“So they have been playing a very strong political hand but in economic terms it hasn’t been very responsible because they are refusing to actually tackle and restructure thier banking sector which is what they need.”

Peer Steinbrueck, Germany’s finance minister, said there were “clear indications” that credit was tight for big- and medium-sized firms, adding that he was considering low-interest state loans.

“If the efforts of banks are not sufficient to supply the economy with enough fresh cash, the state will have to make use of other measures,” Steinbrueck said.

Steinbrueck also said that Germany and France want members of the Group of 20 (G20) nations to agree on tougher rules governing bonus payments in the financial sector.

On Tuesday, Nicolas Sarkozy, the French president, announced limits on bonus payments to bank traders and said he would press G20 partners to adopt the same standards.

G20 finance ministers are scheduled to meet on September 4-5 in London to discuss bankers’ pay as part of a review of progress on pledges to toughen up regulation. 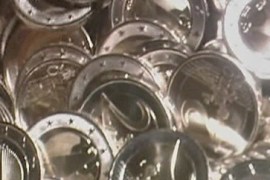 Germany and France are officially out of economic recession. 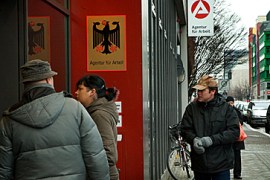 Down and out in Berlin

The arts and marketing industries are bearing the brunt of Germany’s downturn.