Palestinian children in the Gaza Strip have returned to school after their summer break, with a shortage of school supplies and overcrowded classrooms posing a threat to the quality of their education.

Nearly 300 schools and nursery schools were heavily damaged during Israel’s assault on the territory last winter and several were completely destroyed.

Because of Israel’s siege of the enclave, enough supplies of stationary and other school equipment is not available in Gaza and neither is necessary construction material to repair the damaged schools.

Al Jazeera’s correspondent Ayman Mohyeldin said children in the Omar Khatab school were attending classes in shifts when he visited on Sunday, the first day of the school year.

“Just adjacent to this school is a school which was destroyed by Israel’s war. Many of the students there have come to this school. What that creates is a sense of overcrowdness,” he said.

“All of the glass at the school is still pretty much bombed out and that will pose a serious problem for the school come winter time if they don’t get in the supply of that material.

“Officials are concerned that the quality of education will decline because of supplies and construction materials.”

Officials of Gaza’s Hamas government have decided to exempt students from having to wear school uniforms.

Umm Hisham, a Palestinian woman in Gaza, told Al Jazeera:  “I have seven children. How can I afford this very expensive uniform?

“Besides, it is Ramadan now, and Eid is coming after, and there are many commitments for all these occasions.

“It is not only me, all people here in Gaza suffer.”

Despite the difficulties, Muhammad Askol, the education minister in the Hamas government, was optimistic.

“Facing obstacles and complications is not new for the Palestinian society in Gaza,” he told Al Jazeera.

“We have become used to handling the siege. Last year, we started the new academic year with only 60 per cent of the teachers, but this year we are starting with full capacity.

“I believe we now have the minimum level of capabilities that enable us to go on.”

According to a United Nations investigation, four schools that were being used as registered emergency shelters were bombed or fired at during Israel’s 21-day military operation.

Twelve teachers and 164 students were killed during the same period. 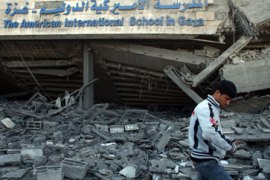 Fear and trauma in Gaza’s schools

Teachers say students are too frightened by Israeli raids to resume their studies.