It is a US-run prison built from scratch on an US military base to hold “enemy combatants” captured in the so-called “war on terror”.

Those imprisoned there have never been charged with a crime, nor do they have any meaningful way of challenging their detention.

The inmates allege abuse at the hands of their captors, ranging from sleep deprivation to brutal beatings. And no, it is not Guantanamo Bay.

The Bagram Theatre Internment Facility lies on a sprawling US military complex, 40km northeast of the Afghan capital Kabul. It holds almost three times as many prisoners as Guantanamo and, as its better-known Cuban counterpart prepares to close, the Bagram prison is about to double in size.

You could be forgiven for never having heard of the prison at Bagram. After all, Barack Obama, the US president, does not like to mention it, preferring to concentrate on his flagship policy of closing the Guantanamo Bay prison facility.

Journalists are not allowed to visit and lawyers are banned from the premises. Even the number of prisoners held there remains an official secret. Estimates suggest it currently houses more than 600 but exact details remain classified by US authorities.

While Guantanamo has been in the spotlight in recent years, Bagram has operated in the shadows. The first announcement of detentions at Bagram came in January 2002 and, as the US renditions programme swung into action, the site became a key regional hub in a global network of prisons.

It was often used as a holding site for those on their way to Guantanamo Bay. Omar Deghayes was held in Bagram in 2002 before he was transferred to Cuba. He says it was a terrifying experience.

“Lying on the floor of the compound, all night I would hear the screams of others in the rooms above us as they were tortured and interrogated,” he says.

“My number would be called out, and I would have to go to the gate. They chained me and put a bag over my head, dragging me off for my own turn. They would force me to my knees for questioning, and threaten me with more torture.”

While Guantanamo’s population declined, Bagram’s increased. With the former coming under increasing scrutiny, the latter had become a destination as well as a hub.

Last summer, while Barack Obama campaigned on promises to close Guantanamo Bay and end CIA detentions, the US government approved plans for a $50mn redevelopment of the prison at Bagram.

Construction of the project is now well underway.

The new 40-acre site will have space for 1100 inmates and there will be low and high-risk detainee units spread across multiple buildings. There will be recreation yards, guard towers and specialist medical facilities.

The structures are described as “semi-permanent,” suggesting that the new prison will be in use for some time to come.

With Guantanamo’s days numbered, lawyers and campaigners are shifting their attention to those held in Bagram. Top of their list of priorities are efforts to force the US government to release the identities of those held there.

In the US, the American Civil Liberties Union (ACLU) has filed requests under the Freedom of Information Act in a bid to obtain details about the inmates. The requests have been refused.

“There are serious concerns that Bagram is another Guantanamo – except with many more prisoners, less due process, no access to lawyers or courts and reportedly worse conditions,” says Melissa Goodman, staff attorney with the ACLU National Security Project.

“As long as the Bagram prison is shrouded in secrecy, there is no way to know the truth or begin to address the problems that exist there.”

But the US government rejects the argument that the two groups of prisoners qualify for the same rights.

The Pentagon says that Bagram is a “battlefield” prison and that those held there are prisoners of war.

It also denies allegations of ongoing mistreatment at the site, pointing out that prisoners receive regular visits from the International Committee of Red Cross.

“Department of Defence policy is and always has been to treat detainees humanely,” a Pentagon statement said after a recent BBC investigation turned up more allegations of abuse.

“There have been well-documented instances where that policy was not followed, and service members have been held accountable for their actions.”

But judges in the US see at least some parallels between Guantanamo and Bagram.

A US court ruled earlier this year that foreign nationals arrested outside of Afghanistan and flown to Bagram – believed to be a minority of those held there – are eligible to challenge their detention in court.

However, without any means of accessing the prison or identifying the prisoners, lawyers cannot obtain the necessary authorisations to begin proceedings.

The deadlock is forcing them to seek other ways to discover who is being held in the prison.

Reprieve, a London-based legal charity that represents prisoners in Guantanamo Bay, announced it was suing the UK government this week in a bid to obtain the identities of two Bagram prisoners that British forces captured in Iraq in 2004 and handed to the US military.

The two men were rendered to Afghanistan and have been held in Bagram ever since. After years of denying involvement, the British government finally admitted its role in their capture earlier this year and apologised.

But, citing the men’s privacy rights, the government has refused to release their names. Without identifying them, lawyers cannot act for the men.

Clive Stafford Smith, director of Reprieve, explained why the charity was launching the action: “Imagine, if you will, that a criminal was to apologise for taking part in a kidnap, but then refuse to name his victims, or to help secure their freedom. We would hardly accept the apology as being sincere.”

“Here, the government admits its involvement in the crime of rendition, says it apologises, but then does nothing to reunite the victims with their legal rights.”

Even if prisoner lists were to be released, only those inmates who were rendered to Bagram from another country would be eligible for legal representation. The Afghan inmates, who make up the majority of the prison population, have no access to any form of judicial process.

Advocates for the prison say that it is on a “battlefield” and class its inmates as prisoners of war, who are therefore not entitled to challenge their detention.

But critics point out that in a war where there is no uniformed enemy, innocent men may have been swept up and detained.

The best hope for Afghan inmates lies in being classed a “Low Level Enemy Combatant” at one of the periodical military review boards that all prisoners in Bagram face.

This designation can be enough for them to be transferred to Afghan custody, where they can access a lawyer. But the prisoners’ review boards are run by their accusers, evidence is classified, no defence can be submitted and they are not allowed to attend the hearing.

It’s a long way from the sort of justice that human rights campaigners would like to see administered in Bagram. Having fought their way through the courts to win freedom for at least some of the men held in Cuba, they are now gearing up to take on what they call “Guantanamo’s more evil twin.”

The US government, on the other hand, is intent on blocking such moves.

Campaigners may see Guantanamo and Bagram as twins, but the Obama administration has made it clear in recent months that it does not believe the two prisons are cut from the same cloth, nor that their respective populations should be treated identically.

As the arguments progress, 600 nameless men are waiting to see how much family ties really matter in the world of US military detention.

Reprieve is a legal charity based in London that represents more than 30 prisoners in Guantanamo Bay and investigates US secret prisons worldwide. 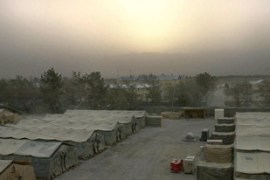 Bagram base attack kills US troops

Six Americans wounded in addition to two fatalities in shelling claimed by Taliban. 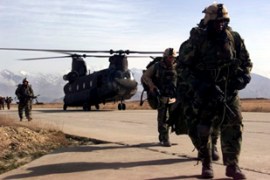 Foreign detainees held at US base in Afghanistan can challenge their detention. 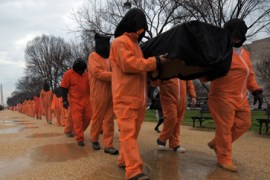 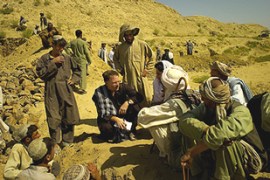