One resident, Daud Haji Ibar, said: “There was no big fighting, but the government soldiers have left the western part of Balad Weyne and the al-Shabab men are in control.”

Witnesses said they saw Ethiopian troops entering Somalia, identifying them by their uniforms and vehicle licence plates. However, Ali Mohamed Gedi, a spokesman for the regional government of Balad Wayne, denied the claims.

Control of Balad Weyne gives a military advantage because of its proximity to Ethiopia, which has sent troops over the border in the past in support of government troops.

Balad Weyne also serves as a link between southern Somalia and the agriculturally rich central region.

The latest clashes come amid a vast counter-offensive against al-Shabab strongholds in the centre and south of the country.

Somalia has been under a state of emergency since Wednesday.

Violence in Somalia has killed at least 18,000 civilians since the start of 2007 and displaced at least one million others. 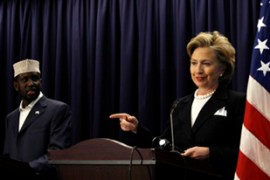