The bride escaped injured, but her mother and sister were killed.

Al-Qabas said the woman’s maid had told police she saw her employer pouring petrol around the large women-only tent in the town of Jahra before the blaze started on Saturday night.

Ninety other people were injured in the inferno, which was the deadliest civilian disaster in the modern history of the Gulf state.

Most of the bodies were charred beyond recognition and forensics specialists were working to identify the victims, officials said.

Sixteen of the dead were buried on Sunday.

Five people remain in critical condition with severe burns. At least seven of the dead were children.

Medical officials have said that specialised medical teams from Germany and Britain were coming to Kuwait to treat the injured.

The government of the oil-rich state has formed a high-level committee to investigate the incident after sharp criticism by politicians that authorities were too slow in the rescue operations.

A number of MPs have demanded a probe into why authorities failed to apply strict safety and security rules for wedding tents.

The interior ministry has advised citizens against setting up tents in residential areas as they could obstruct any rescue operations.

Emir Sheikh Sabah al-Ahmad al-Sabah expressed deep sympathy with the families of the victims and said he will not accept greetings on the occasion of the Muslim fasting month of Ramadan, expected to start this weekend.

Several MPs have called on the government to declare a state of national mourning.

Last year, two women died and several others were wounded in a similar incident in Jahra, 50km west of the capital Kuwait City.

Most wedding parties in the conservative Muslim Gulf state are segregated in line with local tradition. 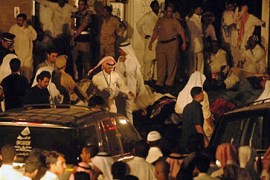