The government’s appeal to the media not to cover violent incidents on election day was contained in a foreign ministry statement.

“All domestic and international media agencies are requested to refrain from broadcasting any incident of violence during the election process,” it said.

The statement said the move was necessary to “ensure the wide participation of the Afghan people”.

The difficulty of ensuring security has been underscored by Wednesday’s bank attack in Kabul.

Explosions and gunfire could be heard from the building, situated just a few hundreds metres from the presidential palace compound, a witness told the Reuters news agency.

“There are differing reports on exactly how many gunmen [were involved],” he said.

“The ministry of interior is saying three to four gunmen entered the bank. They say at the moment it is not clear whether this is a Taliban attack or the work of bank robbers.

“But the Taliban says it is their operation. A Taliban spokesman told Al Jazeera there are five attackers equipped with suicide vests.”

The bank incident followed a series of attacks launched on Tuesday, including a suicide car bombing east of the capital along the Jalalabad-Kabul road, which targeted members of Nato’s International Security Assistance Force (Isaf).

Eight people were killed in the attack, including a Nato soldier and two UN workers, and 52 wounded.

Aleem Siddique, a spokesman for the UN mission in Kabul, said that a UN vehicle had been caught up in the strike, but had not been the main target.

The road is often attacked by the Taliban due to the large number of compounds and military bases alongside it.

The Taliban claimed responsibility for the raid, which came hours after two mortars hit the presidential palace in Kabul and nearby police headquarters.

No casualties were reported.

About 17 million people are eligible to vote in Afghanistan’s elections. They will be voting for a president and 420 councillors across 34 provinces.

The Nato-led military force in Afghanistan has vowed to make every effort to protect voters, saying that more than 100,000 international troops will refrain from offensive operations on election day.

“Our efforts alongside our Afghan security partners will focus on protecting the people of Afghanistan from the insurgents so that the population can freely exercise their right to choose their next president and their provincial representatives,” Brigadier-General Eric Tremblay, a spokesman for Nato, said.

But the Taliban have demanded that Afghans boycott the polls, threatening to cut off the fingers of those who vote and saying they will attack polling stations.

Without an outright majority, Karzai would be forced into a run-off with his closest challenger, predicted to be Abdullah Abdullah, his former foreign minister. 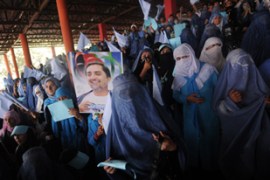