“Sorry we were late,” he told residents in the southern county of Pingtung on Sunday.

“As the president, I will take full responsibility in getting the remaining work done well.”

More than 60 countries have donated about $2 million to the rescue effort, and on Tuesday, US military helicopters joined Taiwan’s massive rescue operation, lifting excavation equipment into areas that have been cut off for 10 days
by floods and mudslides.

Meanwhile, rescue operations continued at a slow pace as many typhoon victims, mostly aboriginal people, refuse to leave cut-off villages, fearing they would not be allowed to return.

A total of 1,638 people still needed to be airlifted as of Sunday night, according to the government, but only a small number were brought to safety during Monday’s operations, said Colonel Tai Chan-Teh, the military spokesman said.

“Most of the people still stranded on the mountain refuse to leave,” Tai told AFP news agency.

Mao Chih-kuo, the transport minister said the army may have to start removing people by force, because it would be too expensive to airlift food and supplies to the villages in the six months it is expected to take to rebuild roads.

Christopher Kavanagh, spokesman for the American Institute in Taiwan, the de facto embassy, told AFP that US heavy-lift military helicopters were to carry 12 crane shovels into the disaster area to help speed up repairs to blocked roads, said .

At a makeshift morgue in the southern Chishan township, a senior police officer said work was going slowly.

He said only 50 bodies had been processed because corpses were badly damaged and would require DNA identification.

Ma had already warned the death toll from Typhoon Morakot could climb to more than 500. 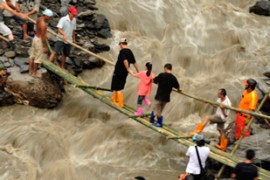