Hyundai Asan is a Hyundai subsidiary which helps run a joint factory park just north of the demilitarised zone between the two Koreas.

North Korea’s move, which comes a week after it freed two jailed US journalists, is seen as a rare conciliatory gesture likely to ease tensions between the rivals.

The latest move by the communist state could lead to restored business ties with Hyundai Group and calm investors worried about troubles in the North spinning out of control.

Hyun Jeong-eun, the chairwoman of Hyundai, arrived in Pyongyang, the North’s capital, on Monday to seek Yoo’s release and the resumption of tourism to the Mount Kumgang resort in North Korea.

The company has invested hundreds of millions of dollars in the resort, whose operations were suspended a year ago, as well as the factory enclave, the last major economic project between the two Koreas.

A company spokesman said Hyun extended her stay in Pyongyang until Saturday, fuelling speculation of a meeting with Kim Jong-il, the North Korean president, and raising hopes of better cross-border relations after 18 months of bitter hostility from the communist state.

Cho Myung-chul, an expert on the North’s economy at the Korea Institute for International Economic Policy, said: “North Korea is hoping for a monetary link that could mean more cooperation in the Kaesong complex, restarting tourism at the Kumgang resort or stopping South Korea’s anti-North movement.”

Last week the North released Laura Ling and Euna Lee, the two US journalists sentenced to 12 years hard labour for illegally entering the country, after a high-profile meeting between Bill Clinton, the former US president, and Kim.

Koh Yu-Hwan, of Dongguk University, said Yoo’s release will also be a turning point in frozen ties between the two Koreas.

“It reflects Pyongyang’s belief it cannot improve relations with the US without easing cross-border tensions,” he told the AFP news agency.

“North Korea also badly needs economic help from South Korea to overcome economic difficulties and food shortages, which have worsened this year due to international sanctions and regional tensions.”

The impoverished North has in recent months raised tensions with a nuclear test, ballistic missile tests and threats to attack its prosperous neighbour.

North Korea’s battered economy is just two per cent that of South Korea’s. 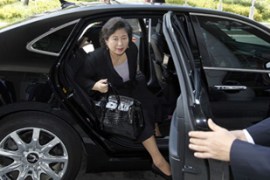