“The large amount of greenhouse gases emitted through human activities is the main reason for global warming leading to extreme weather events.”

With its rapidly economic growth and industrialisation China is widely considered to be the world’s main source of greenhouse gases.

Some forecasts have predicted those emissions will almost double in the next decade.

The meeting of the State Council Standing Committee, or cabinet, comes as Beijing seeks to take on a key role in negotiating a new climate change pact in Copenhagen at the end of the year.

According to Xinhua, the cabinet stressed the “urgency” of tackling climate change and called for domestic objectives to control carbon emissions, although it did not set out specific targets.

It also called for the government to “nurture new points of economic growth that feature low carbon emissions and accelerate development of a low-carbon emissions systems for industry, construction and transport sectors,” Xinhua said.

“This shows climate policy issues are now a central part of the national strategy,” he said.

China has frequently argued that it and other developing economies should not be expected to shoulder strict targets on gas emissions, saying rich nations should lead the way first with big cuts in their own emissions.

But the government’s latest statement adds to signs that some specific emissions goals may be included in the country’s next five-year development plan starting from 2011. 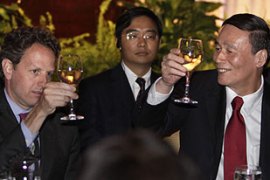 US and China vow closer ties 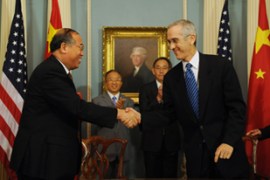 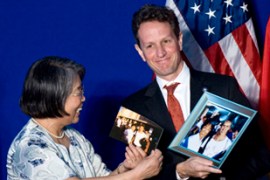 The richest nations agree to limit global warming to within 2C by 2050.