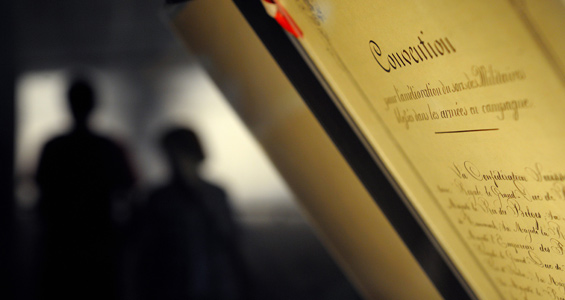 On August 12, 1949, in the aftermath of one of the most devastating conflicts the world had ever seen, something extraordinary happened.

Representatives of 64 countries, some of which had been at war with each other just four years earlier, came together in Geneva and signed an international agreement to protect those caught in conflict.

The four Geneva Conventions have become the foundation of today’s laws of war, providing protection for wounded members of armed forces in the field and at sea, prisoners of war and civilians.

More countries have signed up to the Conventions than there are member states of the United Nations.

Of course, ratifying the treaties and acting in accordance with them are very different things. The Conventions have been flouted during their existence, but supporters say they have saved millions of lives and greatly reduced the suffering caused by conflict.

Nevertheless, some argue that they are no longer relevant. War, the argument goes, has changed, and the Conventions are ill-equipped to legislate over the new types of conflict.

Even the International Committee of the Red Cross (ICRC), which has strong historical links to the Conventions, says they need to be updated.

In a speech to mark the anniversary of their signature, Jakob Kellenberger, the ICRC’s president, said unless there is clarification over what constitutes involvement in modern conflict, in which rebel groups increasingly disguise themselves among local populations, then “far too many civilians” risk becoming “lawful targets”.

Few would dispute that warfare has changed over the past 60 years. Today’s conflicts are more likely to occur within states than between them, and those involved are increasingly likely to be fighting for an ideology than a country.

From Palestine to Afghanistan, Sri Lanka to Iraq, the distinction between solider and civilian has been blurred.

But others warn that tampering with the wording of the Conventions could cause additional problems, allowing governments currently in breach of their requirements to legitimise their positions.

As the Geneva Conventions turn 60, questions are being asked over whether the international community should gamble on improving them, or stick with the laws we have.

It’s a question with no simple answer. Kellenberger admitted that the Conventions had survived a “difficult phase” in the years following the September 11 attacks, when the Bush administration tore up the rule-book by arguing that prisoners held in the US military jail at Guantanamo Bay were not eligible for Geneva protections.

It took more than four years of litigation for the government’s position on the treatment of prisoners in to be deemed illegal by the US Supreme Court, which ruled that those held at the prison should be held in accordance with the Convention.

Even then, those close to George Bush, the former US president, made it clear they did not agree with the court’s decision.

“We strongly believe that terrorists picked up off the battlefield – who don’t represent a nation, revel in killing the innocent, and refuse to wear uniforms – do not qualify for protections under Geneva,” Dan Bartlett, a White House adviser, said after the decision.

The rhetorical broadside against the Third Geneva Convention may have ended with the Bush presidency, but the smoke has not yet cleared.

Barack Obama, the US president, has made clear that Guantanamo’s detainees should be protected by the Conventions, winning him plaudits from many who criticised Bush.

But lawyers for some of the 229 prisoners left at Guantanamo say the conditions faced by their clients are still in breach of the rules of war, and some prisoners say that in the high security camps, they have become even worse.

Perhaps unsurprisingly, some human rights lawyers remained unconvinced by the arguments to update the Conventions.

“The Geneva Conventions are part of the fabric of international human rights law, and must be zealously protected,” says Clive Stafford Smith, director of Reprieve, a London-based legal charity that represents prisoners held at Guantanamo.

“If you want to know what the ‘modified terrorism Geneva Convention’ would be, you have to look no further than Guantanamo Bay – unlimited interrogation, secrecy, and incarceration without trial in a maximum security cell – in a word, everything that the Conventions prohibit,” he says.

So is the international community caught in a bind? At first glance it may seem that way.

Changing the Conventions apparently risks their debasement, and maintaining them risks a slow drift to irrelevance as conflict evolves away from the model upon which these laws were based.

But a third school of thought appears to offer a way out. Some experts believe that the Conventions have evolved toward meeting the challenges posed by a changing world.

In an article written for Chatham House, an influential foreign policy think tank based in London, Adam Roberts, the president of the British Academy, argues that the Conventions have become a foundation stone for a dynamic body of international humanitarian law.

He points to the addition of the Geneva Protocols, which were approved in 1977, and more recent treaties banning the use of land mines and cluster munitions as evidence that the Conventions are no static document.

Robert also argues that a process of constant reinterpretation over the years has prevented the Conventions from slipping into obscurity.

Pointing to examples including both the Bush administration’s attempts to suspend the convention for Guantanamo detainees, and the US Supreme Court’s subsequent over-ruling of that position, Roberts argues it is precisely this sort of legal wrangling that keeps the Conventions relevant.

“In marking 60 years of the Conventions,” he writes, “It is not just their endurance that should be praised, but their little-noted but remarkable capacity to adapt to changed circumstances.”

It is this capacity that has allowed the Geneva Conventions to inform international debate for the past 60 years, and while the arguments continue over whether they should be updated, history suggests they will remain relevant as long as the political will exists for them to be so.

Reprieve is a legal charity based in London that represents more than 30 prisoners in Guantanamo Bay and investigates US secret prisons worldwide.

The views expressed in the above column are the author’s own and do not necessarily reflect Al Jazeera’s editorial policy.