Russian troops and Abkhazian forces helped repel a Georgian attempt to retake South Ossetia, another breakaway region, in a five-day war which ended a year earlier.

Both Georgia and the breakaway regions marked the first anniversary of the conflict last Friday and there have been increasing tensions along the de facto borders between the areas and Georgia proper.

Only Nicaragua has followed Russia’s recognition of Abkhazia and South Ossetia as independent states and the rest of the world views the enclaves as part of Georgia.

“Frankly speaking, Abkhazia needs no other recognition except Russia’s,” said Putin, who urged Russian businesses to snap up assets in Abkhazia.

Georgia said the prime minister’s trip to the region was a direct challenge that would escalate tensions in the Caucasus, a key route for oil and gas flows from the Caspian Sea.

“Putin’s visit to the occupied territory of a sovereign country is yet another provocation,” Georgia’s foreign ministry said.

It described the trip as “yet another attempt to destabilise the situation and escalate tension in the Caucasus region”.

When asked if there would a repeat of last year’s war, Putin said: “With today’s Georgian leadership, you cannot rule anything out.”

The United States has also called for Georgia’s sovereignty to be respected.

Pro-Russian posters with phrases such as “Russia and Abkhazia: together for prosperity” dotted the streets of Sukhumi, during Putin’s vist.

Putin laid flowers at a cenotaph in honour of those who fell during fighting between Abkhaz separatists and Georgia in 1992-1993.

“Putin is our guardian angel,” mothers of the Abkhaz fighters who were killed in the conflict chanted.

The prime minister later visited a new maternity hospital, where male twins were born half an hour before his arrival.

“They will be called Vladimir and Dmitry,” said Liana Achba, the head of the hospital.

Underlining continued tensions in the region, one person was killed and two wounded in a bomb blast on Wednesday in the Abkhaz resort of Gagra. 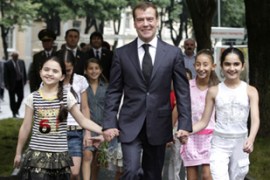 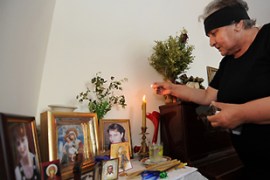 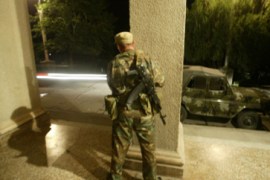 A year after the war between Russia and Georgia, breakaway region watches for attack.

On first anniversary of the war between Russia and Georgia over South Ossetia, Neave Barker visits the breakaway region.