Yettaw, who is also on trial, was taken to hospital last week after suffering a series of epileptic fits – raising speculation that the verdict in the case could again be delayed.

However, he was returned to the jail late on Monday night.

During the trial he told the court he was on a mission from God to warn Aung San Suu Kyi that she was in danger of assassination by “terrorists”.

The verdicts against Yettaw and Aung San Suu Kyi had originally been due on July 31, but at the last minute judges announced that they needed more time to review the case.

Analysts at the time said the delay was likely the result of Myanmar’s military government being uncertain how to handle the case in the face of mounting international pressure.

Southeast Asia analyst Larry Jagan said there was no guarantee the verdict would be announced on Tuesday, although diplomats had been told to gather at the court for an announcement.

According to the Associated Press a handful of journalists were also allowed into the courtroom.

Jagan said that among possible outcomes was that Aung San Suu Kyi would neighter be jailed or returned to her home, but instead be detained at a specially-built house in a military camp on the outskirts of Yangon.

Aung San Suu Kyi herself has said she is not optimistic about the case and expects the verdict to be “painfully obvious”, according to a handful of diplomats who were allowed access to the final day of the trial.

Myanmar’s ruling generals have kept the Nobel peace laureate under house arrest or imprisonment for nearly 14 of the last 20 years, since her National League for Democracy party won a landslide victory in 1990 elections.

The court is widely expected to hand down a guilty verdict but the sentence remains a matter of speculation.

Critics have said the trial is a sham based on charges trumped up by the military in order to keep Aung San Suu Kyi behind bars through elections planned for next year.

Her lawyers have argued the case is illegitimate because the charges are based on a version of the national constitution that was superseded two decades ago.

They have also said that Aung San Suu Kyi and her two female aides who live with her reported Yettaw’s presence to security officials but they did nothing. 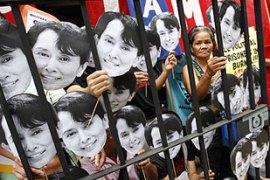 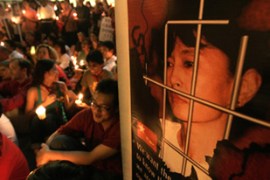 Suu Kyi ‘preparing for the worst’