Etau – meaning “storm cloud” in the Palauan language – first struck Japan’s main island of Honshu at the weekend, flooding hundreds of homes and forcing thousands of residents into emergency shelters.

Television footage showed rescue workers removing debris from houses destroyed by flash floods in the town of Sayocho, in Hyogo prefecture, where a raging river burst its banks.

Police said among those killed were two men and a woman who drowned in the flash floods, adding that many others were caught in the raging waters.

Authorities said they had evacuated about 2,200 people from homes and placed them at public schools in Hyogo.

In adjacent Okayama prefecture, a 68-year-old woman was found dead in her house that was destroyed by a landslide. 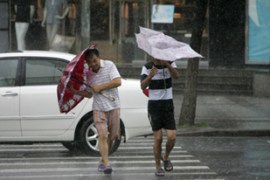