“Aquino helped lead a revolution that restored democracy and a rule of law of our nation at a time of great peril. Our nation will mourn her passing.”

Aquino’s five children have said they will bury their mother in a private ceremony next week.

“She would have wanted us to thank each and everyone of you for all the prayers and continued love and support,” Senator Benigno Aquino Jr, her son, said outside the hospital where the former president died after a battle with cancer.

“It was her wish for all of us to pray for one another and for our country.”

In the Makati financial district of Manila, huge posters of the former president were put up to mark her death.

Hundreds of people travelled to the family home to leave flowers and light candles.

Others tied yellow ribbons to their cars and trees to mark her passing.

As a former housewife who reluctantly became president, Aquino once said: “What on earth do I know about being president?” before taking up the challenge to run against Marcos.

Her victory not only marked a new era for the Philippines, but also for the region as she became Asia’s first female president.

During her presidential term, which her supporters say helped restore democracy in the Philippines, Aquino, known as Cory to millions of Filipinos, oversaw the writing of a new constitution, thereby limiting a president’s time in office to one six-year term.

“The history books are going to remember her well,” Roland Simbulan, a professor in development studies and political economy at the University of the Philippines, told Al Jazeera.

“She helped a lot in the democratic institutions that had been badly damaged, especially during the Marcos dictatorship. During her six-year term of office she was able to tame the military establishment.”

She left office in 1992, but remained politically active until beset by illness.

Aquino brought half a million people out in the streets to protest in the 1990s when Fidel Ramos, her successor as president, tried extending his presidential term.

She was also involved in protests that brought an end to the presidency of Joseph Estrada, Ramos’ successor, in 2001.

She also supported a campaign to remove Arroyo, who was accused of vote-rigging and corruption.

But Aquino was obliged to withdraw from public life after being diagnosed in March 2008 with colon cancer, which spread to her liver just days before her death.

“She inspired a nation, but she did not move us to any big reform or any real change in our social or economic situation,” Marites Vitug from the Philippines Centre for Investigative Journalism told Al Jazeera.

“It was so black-and-white, Marcos was black and she was white, so everything that she touched turned into white, or goodness.” 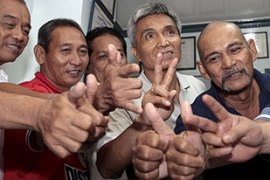