Al Jazeera’s correspondent Melissa Chan, reporting from Urumqi, said one group of Han Chinese, some armed with sticks, shovels and knives, were trying to break through police lines to reach a Uighur area of the city.

Describing a volatile situation in the city, she said some groups of Han Chinese were searching cars looking for anyone they thought to be Uighur.

Some of the Han protesters were singing China’s national anthem and pledging to defend their country.

Other reports have quoted Han Chinese vowing to take revenge on Uighurs they blamed for Sunday’s unrest.

“They attacked us. Now it’s our turn to attack them,” one man in the crowd told Reuters.

Authorities later announced that they would impose a curfew for Tuesday night (1300GMT) until early Wednesday morning in the capital of the region, Xinhua, China’s state news agency reported.

The curfew is aimed at “avoiding further chaos” amid the unrest, Xinhua quoted a government official as saying.

Earlier hundreds of ethnic Uighurs, many of them women, clashed with police as they protested against the arrest of relatives in the crackdown that followed Sunday’s unrest.

Many waved the identity cards of husbands, brothers or sons they said had been arbitrarily detained.

“My husband was taken away yesterday by police. They didn’t say why. They just took him away,” one woman who identified herself as Maliya told Reuters.

Several objects were thrown and fighting broke out when Uighur protesters advanced towards lines of anti-riot police carrying clubs and shields.

The latest clashes came as a group of foreign reporters, including Al Jazeera’s correspondent, were being taken on a tour of the city to see the aftermath of Sunday’s riots.

Chinese police are reported to have arrested more than 1,400 people in a crackdown that Wang Lequan, the head of the Chinese Communist party in Xinjiang, said was intended to quell the unrest, although he warned “this struggle is far from over”.

Wang called for officials to launch “a struggle against separatism”.

The worst unrest in Xinjiang for many years has led authorities to impose a security lockdown on much of the region.

Hundreds of paramilitary police with rifles, clubs and shields have been deployed on the streets of Urumqi and a night-time curfew was imposed on Monday.

Local residents also reported that internet and mobile phone connections in Urumqi were down or restricted.

According to Chinese state media, Sunday’s clashes erupted after a demonstration against the government’s handling of an industrial dispute turned violent.

Reports also suggested that the unrest could be spreading to other parts of the vast Xinjiang region.

According to the Xinhua news agency, police dispersed around 200 people on Monday evening who had gathered outside the main mosque in the ancient Silk Road city of Kashgar.

The Chinese government has blamed Uighur exiles for stoking the unrest, singling out Rebiya Kadeer, a Uighur businesswoman who was jailed for years in China before being released into exile in the US where she now heads the World Uighur Congress, for “masterminding” the unrest.

Kadeer, a 62-year-old mother of 11, rejected the accusations on Monday, saying from Washington that they were “completely false”.

“I did not organise any protests or call on the people to demonstrate,” she said.

Explaining to reporters that she called her brother in Xinjiang when she learnt of the violence in Urumqi to warn her 40 relatives in the region to stay away from the demonstrations, she said: “A call I made to my brother does not mean I organised the whole event.”

“They were not violent as the Chinese government has accused. They were not rioters or separatists,” she said.

She did, however, condemn “the violent actions of some of the Uighur demonstrators”, saying her organisation supported only peaceful protests. 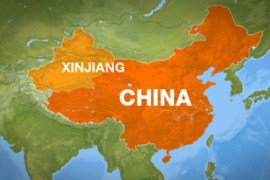 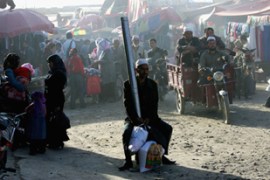