Military aircraft were in the flight path and soldiers and military vehicles were blocking the runway, he said.

Zelaya then headed to El Salvador, to discuss his next move with other Latin American leaders.

He is expected to return to the United States on Tuesday to hold talks with officials from the US State Department, US officials have said.

As Zelaya’s aircraft tried to land on Sunday, the waiting crowd tried to break into the airstrip.

Riot police to fired tear-gas shells and live rounds, resulting in the first known fatalities of the crisis that has engulfed the central American country since the June 28 coup.

One of the victims was a 10-year-old boy. Several Zelaya supporters were also injured in the violence.

Honduran emergency services confirmed that a child had been killed and a Red Cross spokesman said it was treating about 30 people for injuries.

Lucia Newman, Al Jazeera’s Latin America editor, said Sunday’s fatalities could be a turning point for the interim government, which had been boasting for days that the coup against Zelaya had been bloodless.

The interim government had warned Zelaya that, should he try to return, he would be arrested for 18 alleged criminal acts, including treason and failing to implement more than 80 laws approved by congress since taking office in 2006.

Colin Harding, a Latin American analyst, told Al Jazeera Zelaya was “trying to provoke a confrontation and a showdown and he has succeded in that”.

He said Zelaya was urged not to try to return by Cardinal Rodriguez of Honduras, among others, but “he went ahead anyway”.

“He wasn’t accompanied by Latin American presidents I think because there is a certain amount of uncertainty in the Zelaya camp about the best way to proceed,” Harding said.

“It is inexplicable that his plane was allowed to enter the Honduran airspace and then refused permission to land.

“But behaviour on both sides in this crisis has been very debatable .

“If Zelaya tries to land again presumably the same thing will happen.

“One hopes that some sense prevails and they decide that the time has come now for a negotiated settlement.

“Both sides have hinted every now and then that they might be prepared to enter into discussions and make some concessions, but no format for these dsiscussions has been arrived at.”

Harding also said time had come for “some decisive diplomatic intervention” to get the two sides to start talking to each other.

In the run-up to the airport drama, leaders of the interim government gave a televised news conference and called for dialogue with the Organisation of American States (OAS).

The OAS, a hemispheric bloc dedicated to strengthening political co-operation and reforms, suspended Honduras’s membership of the body on Saturday.

“The Republic of Honduras has communicated to the representative of the OAS in Tegucigalpa that it is willing, with the aim of conducting conversations in good faith with a mission of representatives of the secretary general,” Alvarado, the interim deputy foreign minister, said.

Neverthelesss, tensions between Honduras and several of its neighbours sympathetic to Zelaya remain high.

Roberto Micheletti, who was sworn in as Honduras’ president after the coup, said on Sunday that the Nicaraguan military was moving towards the two countries’ shared border.

“We have been informed that in the sector of Nicaragua some troops are moving toward the border,” he said.

A Nicaraguan army spokesman said that the Honduran accusations were “totally false”. 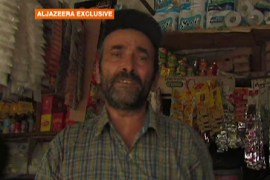 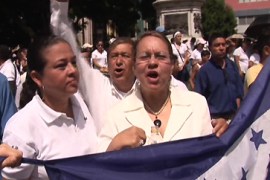 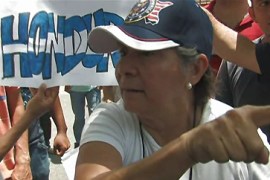 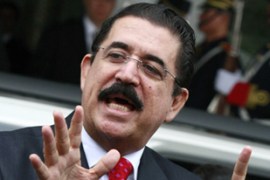